I finished putting my zig zag blocks together today. I can't decide if I want to add a border or not. In real life hanging at the top of the stair, it looks finished and ready to quilt and bind. But seeing it here in this photo, it looks incomplete. 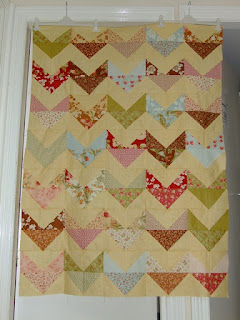 It can hang for a day or two, while I contemplate.
Onto the big blue crochet monster..... I started to add borders last night, got about half way around, with the first round.

Tony went back to work today after his week off and the public holiday yesterday. I loved having him around a doing stuff with him, but I have to say, it's nice to have just me home again. :-)
I return to work tomorrow. I tagged my break onto my rostered long weekend.
So what did I do with my me time today? I spent an hour or so up in my play room this morning. My design floor is bare and my cutting table has two piles of blocks waiting for me to trim them before making up rows. It was lovely to play up there for a while. 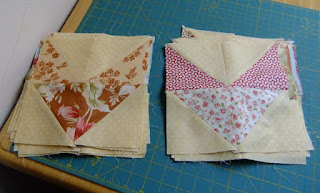 After a great swim I met up with a girlfriend, we came here to my place where sat with a cuppa and put the world right. We hadn't seen each other for a few months so it was nice to catch up. She couldn't get home as her house is 'inside the course'. The Grand Prix races are held on closed public roads. While we chatted I put another couple of rows into my crochet blanket. I believe I'm into the last colour repeat, just 5 more rows and I'll call it quits.
Although I went for a swim at lunch time, Tony and I will be walking when he gets home from work, so dinner is a chilli which I have slipped into the oven to cook slowly. It should be delicious by the time we get it.
I'm off to hook some more before Tony gets home.

I called into the little co-op last night to grab some milk, and spotted that they had fruit selling cheap again. So I picked up a half kilo of blueberries! It's a good thing mum brought me some empty jars yesterday. LOL The first order of business today was more jam. 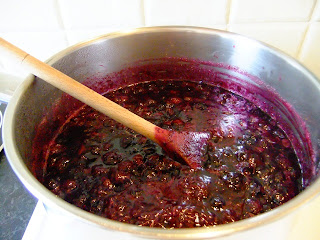 Well it's not really walking weather is it? Nor is it motorcycle racing weather either. But getting back to walking. Tony and I did just over 7 miles yesterday. :-)  It felt really good. 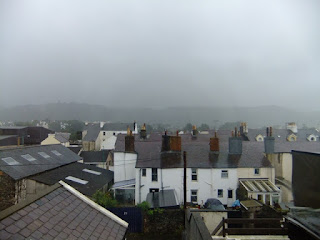 Mum came for dinner last night. Not one of my usual massive roasts of beef though. I made my own corned beef. I've had 'real' corned beef when I was in NZ, but never seen it here in GB, I've only ever seen the tinned stuff here. So I routled about on the WWW and came up with a recipe/method. It was delicious and smelled fantastic before I had even cooked it. Everyone who tasted it agreed, so I'm sure I'll be doing that again. 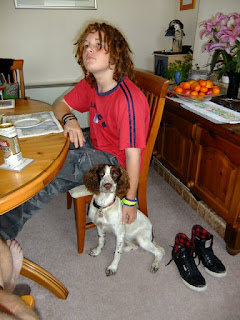 Remember mums fur baby Ailsa? She has grown a lot. And she is much better behaved that her new friend. Skye, is 10 weeks old and what a pest! She wants to chew everything. 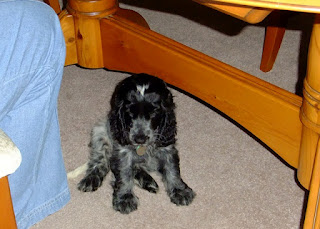 I'm not sure that mum needs two dogs, but that's what she has!!
On a crafty note, I took the blue blanket upstairs and tried it on my bed this morning. Look, it's nearly finished. I would happily add a couple of border rounds now, but Tony has asked me to keep on adding rows to cover the pillows too, then add a very thin border. Either way, the end is in sight. :-) 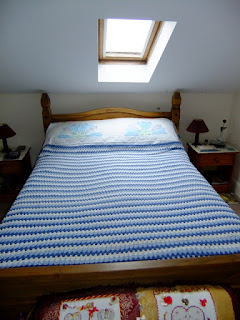 No walk today, the swimming pool is closed for the public holiday, so I think we'll be having a day at home.

I can't have a blog post without pictures, so amid my ramblings I've included some images from the Festival of Quilts at Birmingham. I do have details for these, if anyone wishes to know more about them besides how good they look, just comment and ask. :-) 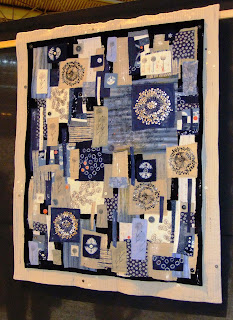 I've had a week off work, so has Tony, we've been busy doing things together. Last weekend was my baby sisters wedding, just outside London. She had a beautiful day, wall to wall sunshine and 30 degree heat. We Manxies are just not used to that sort of temperature. 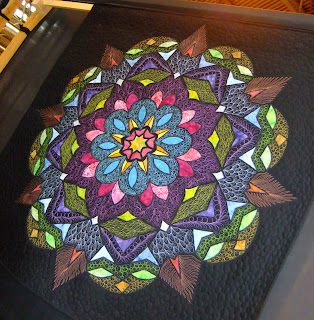 Having Tony off work has been fun, we've been out for dinner a couple of times this week. Firstly to the local Italian restaurant and last night to an Indian restaurant. 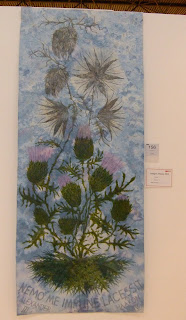 If the weather had been a little better we would have done plenty of walking, but alas, only a couple of short walks. We did however get plenty of swims. Now I love swimming and can plod up and down the pool for hours. Tony on the other hand gets bored after 45 mins. LOL So ends up sitting on the side waiting for me. 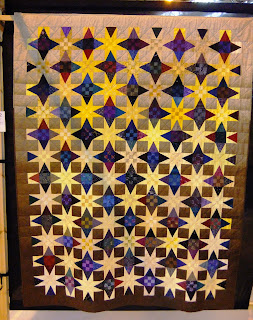 I've done some baking and plenty of jam making. My freezer is full of goodies and I have a good stash of preserves. I think my brother has probably eaten all of his share already. I have suggested he make his own, but as he says, he just begs and pleads at either me or mum and he gets! 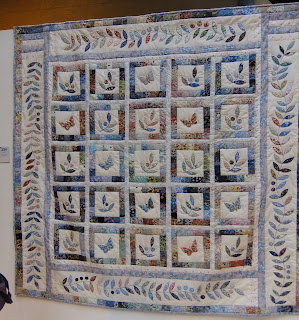 The house got a good clean up. Tony even vacuumed the stairs for me yesterday. A job I avoid as I end up with a very bad back! 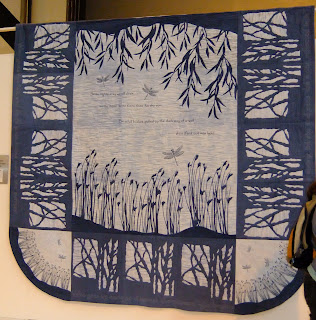 In the evenings I've been busy with my hook putting more rows onto my crochet monster. I think another 15 - 20 hours and it should be ready for the border rounds. :-) 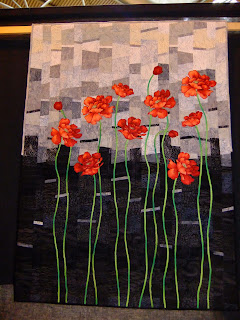 In fact I'm so convinced I've already pulled yarn from my stash and topped it up with new purchases in preparation for my next crochet project. Yep! Another biggie. Lots more colours involved this time though. 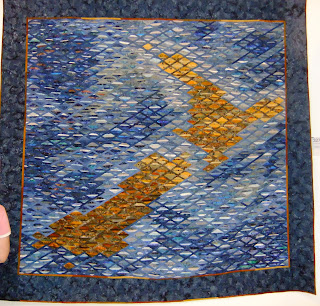 I haven't done much with my latest quilt though, having completed only a few more blocks. I have been plotting it's quilting design though. Back to basics with some straight lines! LOL 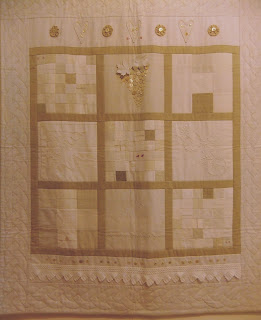 I saw this one and thought of Chookyblue. 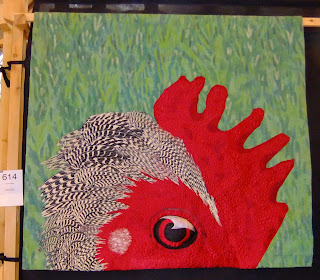 This fortnight the island is buzzing with extra motor bikes again as it is Grand Prix week. The lesser known cousin of TT week. There are more classic bikes here and the races are often used as a proving ground for the TT.  It was through their visit to the island for the bikes that I met Janice and her husband Mick. They will be back here this time next year to see the Grand Prix races. Hopefully Tony and I will still be here. 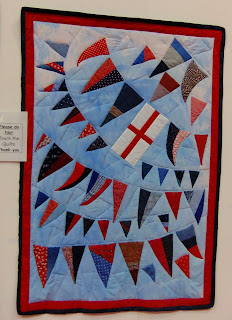 We're still waiting and stuck in limbo. We know the branch will be closing and Tony will be made redundant, we just don't know when. The first few people have already been laid off! Some people have decided not to wait and have found other jobs and left already. Being in IT has advantages, they have to be there to the very end, but when will that be? Apparently not later than 31st December 2013. But it could be sooner............. 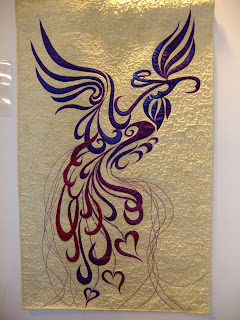 Well, it's a dry day, so we're off for a walk. Better make the most of it as the forecast says wall to wall rain tomorrow!! 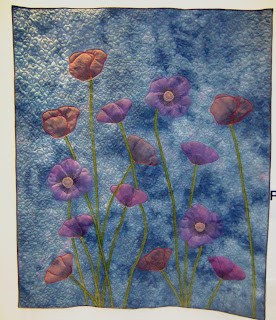 Although we have been incredibly busy, we both agree that we feel very relaxed and had a great week off.
I do hope you enjoyed my memories of the festival. As I said at the top, if you want more info, just ask.

I can take a hint.

I've had a few emails wondering where I am and if everything is OK. I'm fine, just very busy. Tony and I have been trying to make the most of what passes for summer this year. On nice days we've been out and about. I've also been busy in the kitchen. Those strawberries were the first fruits of many! Both Tony and my brother are delighted and keep presenting me with empty jars and asking for more. LOL
I have found time for a little shopping too. I treated myself to some new books recently. I found this one in the local book store and instantly decided to do a couple of projects. 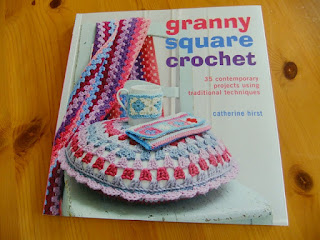 After saying I wouldn't be going, I exercised my girly right to change my mind and hopped onto a plane for Birmingham. Mum came along too. She bought more than me, which is normal. She has a couple of projects lined up for me. 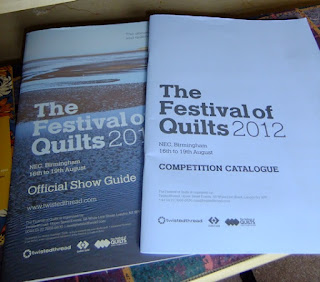 I bought some blue fabrics. I've been collecting blue for a few years now. I think I finally have enough and need to get all my whites together, perhaps it's finally time to start another big one. :-)
I also purchased a couple of books. I've wanted this one for a while. 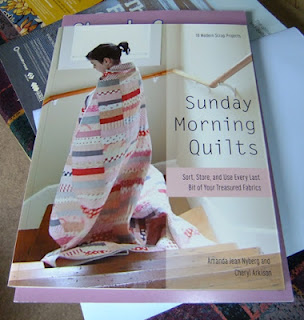 We all need some scrappy inspiration. I couldn't resist this one. 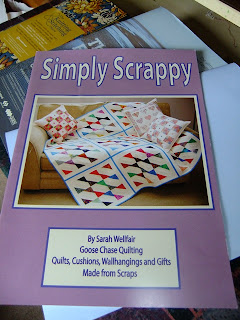 Proof if it is needed, that I am still crafting. My blue and white Granny stripe is growing slowly. I put in a row or two here and there. 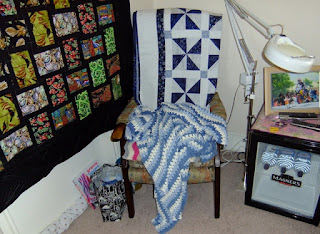 And occasionally I find time to scoot up to my play room and make one or two of these. 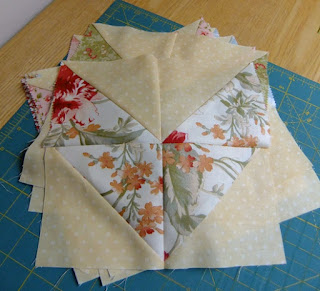 As you can see by my side bar, I've once again joined in Chooky's SSCS. Time I had a think about that and come up with a few ideas while I await partner details.

And these are only part of the reason! When life gives you strawberries, make jam. 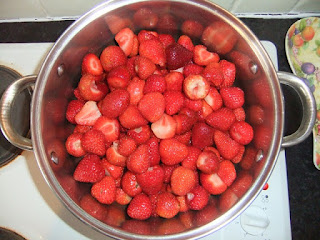 The quilt has progressed a little. I shuffled things around some more then left it to 'soak' for a day. 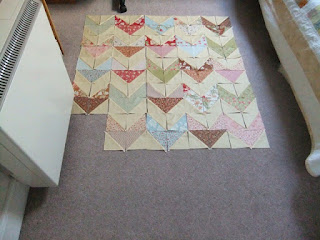 Once I decided I was happy with it I began putting pieces together slowly. 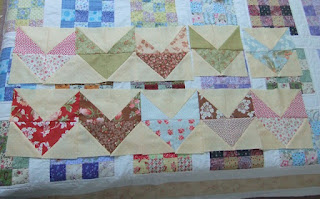 Life the universe and everything is still kind of getting in the way of my downtime at the moment. I find when I do have a little time I prefer to sit on the sofa with my crochet. So that is also making slow progress.