So I popped into the Sally shop the other day, to see if they had topped up their yarn bin and as I payed for my haul of other peoples left overs I spied a wee treasure sat up on the shelf above the counter. The shelf they reserve for the more precious items. Collectibles and such.
The lady was good enough to pass it down and let me take a closer look.
Oooh! so cute.
It had a battery in it and purred away when the foot pedal was pushed, but that is all, just a noise.  It was in poor shape, bashed and battered with a $25 label.
The lovely lady said she would sell it to me for $20.
I decided to sleep on it. I asked her to put it back on the shelf, and if it was still there when I returned, then it was meant to be.
Yesterday I went back and the very same, very nice lady was there.
She sold me the wee cutie.
Look how tiny it is sat here with Jenny Janome and Sally Silver!
Welcome to your new home Orphan Annie. 💖 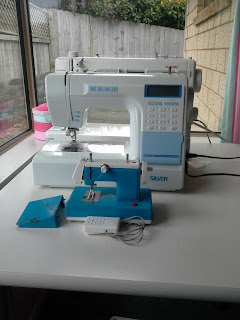 As I said, she is a bit broken. There is a needle, but it only moves when I use the fly wheel manually. There is a light, which I guess is blown. Even when that red button is in the off position, she purrs when you press on the foot pedal. So I think the switch is just for the light. There are no feed dogs, instead the presser foot bobs up and down and moves gently back and forward. Peeking inside her bottom, I found two huge batteries, but could not see where a bobbin might go?
There is no brand name, no makers mark, nothing to say where she came from or how old she is. 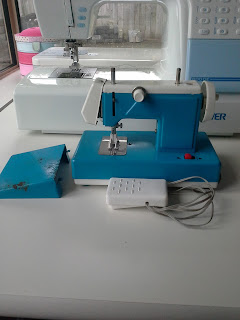 Tony promised to have a look and a tinker. It would be lovely if he could make her work again, or find something inside to say who she is. If he can't.....
never mind, I'll make her a pretty cover and sit her up on the shelf.
Do you know anything about her?
Have you seen a cute wee sewing machine like this before?

So I hit the carpet running this morning. It wasn't my intention, I didn't plan things that way, but as soon as I was out of bed I got busy.
The slow cooker was filled up with lamb shanks and veggies while my tea was brewing, and I just kept on going. Two hours later and I eventually come to sit down and look who is in my seat. 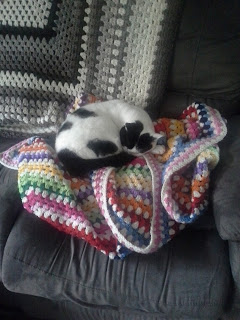 When I asked her to move, I got 'that' look, so now I'm in his seat.
So what have I been doing?
Yesterday we stripped out the green house, there were about 20 litres of green tomatoes. 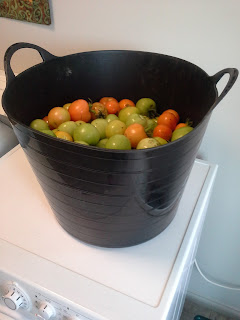 So yesterday afternoon I used about 4 kilos in chutneys, but there was still loads left. 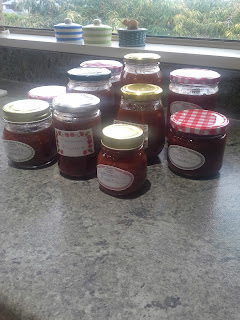 So I went hunting for another recipe and left more green tomatoes in salt over night. 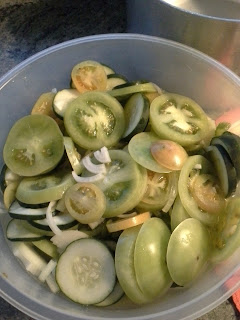 And this morning I rinsed them and added vinegar, sugar curry powder and some other stuff which turned them into Curried green tomatoes.
They smell yummy. 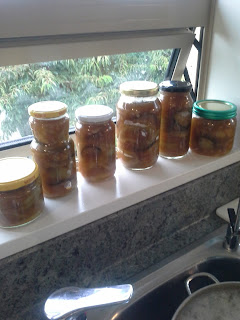 They need to cool a little more, before I stash them away with all the other pickles and chutneys!! 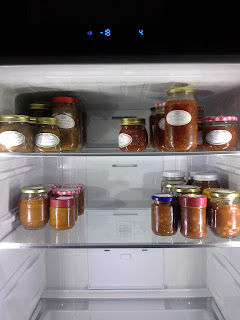 Which currently reside in the spare fridge out in the garage.
It's not all been gardening and pickling.
Look, my blanket is growing. 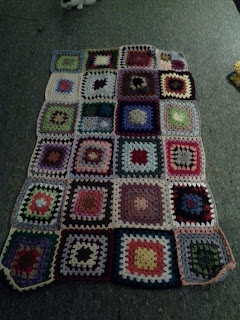 I have three more squares made, ready to be joined on, maybe later today.
I really do need to get a photo of this on a brighter day, it does look different in real life under bright lights.

Of blankets and corn cobs.

I gave a wee taster of this blanket in my last post, Belle had moved in, when I put it down for a moment. Well since then, she has moved on and I was able to get the final round of the border done.
Not a terribly good picture I'm afraid, but the best of a bad lot, it is rather gloomy here this morning.
I wanted to make something low volume, and this little pretty is it, made almost entirely from other peoples scraps and left overs which I purchased from the Sally shop along the road. There are a few pieces of my own in there and I purchased a small ball of white while we were in Auckland, but only because I thought I wouldn't have enough of the palest yarns to continue in the 'light, even lighter and light again theme that I had going. 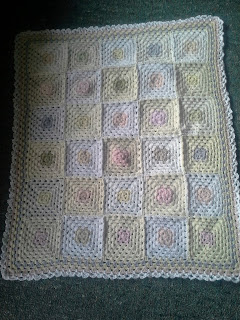 Continuing with the scraps and left overs theme. I'v also shown the beginnings of this one before too. Before we went to Auckland. (If you scroll down on this post you'll find it)  I had made it with some very thin stripes, which I decided I didn't like. So they got ripped out! 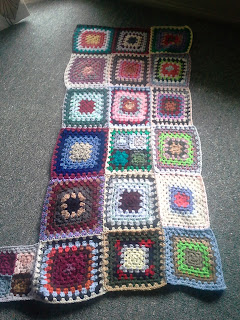 I didn't want to take it along to Auckland as the yarn collection is rather large for a suitcase!
So I continued with it once I was done with the low volume piece.
It is a bit of a challenge at times, all of the blocks have nine rounds, but they are all different sizes as they have so many different yarns. It is fun to crochet though and cosy on these cool autumn evenings.
*
Speaking of autumn, the garden got some attention at the weekend.
We pulled all the sweet corn. Yummy! We are very pleased with our harvest.
It's safely tucked away in the freezer. 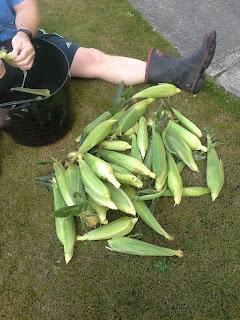 The green house is still going, albeit slower than a few weeks ago, so we'll leave it alone for a while longer. I do have a bowl of fruit to use up today though, I may make chutney as I was given a new recipe while we were away.
I tackled the squash patch yesterday too, many fruits are still not ready for harvesting, but I took what was. 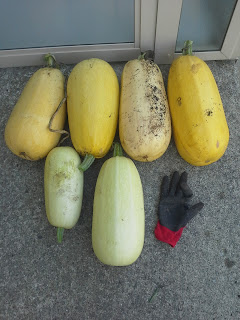 That's my gardening glove laid there beside them, just so you can see what monsters they are! I planted spaghetti squash and butternuts together in the same bed, silly me! The bees were rather promiscuous and I've ended up with four different colours of fruit! There are some darker green ones too. I'm not sure which will have firm flesh and which if any will be stringy like spaghetti. So long as they taste good.
I also had a tidy up here and there pulling the last of the carrots and the green beans as well as a few leeks for a pie for dinner today.
I planted more carrots a couple of weeks ago and they have sprouted. I'm not sure how they will get on over autumn and winter, I'll keep you posted. I plan to put some broccoli and cauli out soon too. I know they will be fine.
Time to go be domestic for a while, then I get to play.

Tony and I took a trip up to Auckland last week to visit with friends.
We timed it all wrong and happened to be there while an incredibly wet weather event was taking place.
Parts of the city were flooded!
Luckily we stayed dry.
Because of the weather there wasn't much in the way of touristy stuff, but we did get out and about. There was some his and hers shopping. 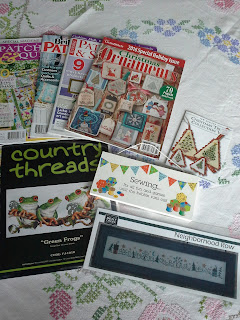 I picked up a few magazines, some cross stitch charts and a kit, and a cute wee hanger for in my room. 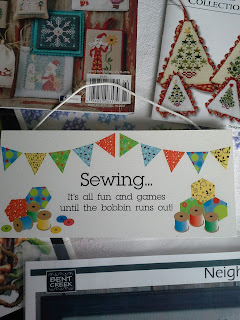 I'm sure we've all had those times when the bobbin has stopped play!
Because of the awful weather, more time was spent indoors than was planned, but fortunately I had taken along a crochet project. I had popped a bunch of scrappy yarn pieces into a bag and set about making more squares. 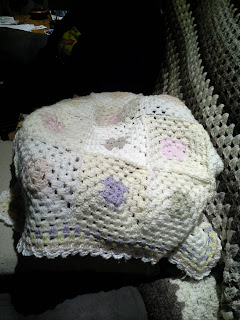 I almost finished a crib/pram size blanket, with just a couple of border rounds left to add.
I forgot to take along a needle for weaving in ends and as I'm not very good at doing that using my hook I have a billion ends to deal with!
After Belle has finished her testing and inspections! 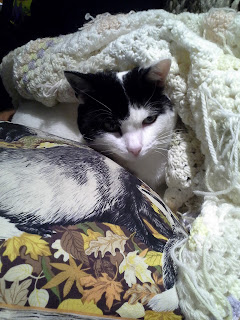 We got home at tea time on Saturday, so a quiet day was had yesterday, I did some laundry, shopped for groceries and then cross stitched.
I plan to stitch today too.