One letter at a time!
I think the best way to get through this frustrating project is one small part at a time.
Todays goal was to finish the letter P. 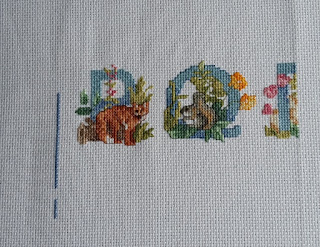 There is still some back stitching to do, but I allowed myself to be side tracked by the border.
I've already slapped my own wrists and will get the P finished before working a little more border then onto the next letter.
Maybe that will happen this evening.

Posted by loulee at 4:29 pm No comments:

Come for a walk in the garden?

I'll be off out to pull a few weeds soon, but before I go, I thought you might like a look about.
It's not just cross stitch that is keeping me away from my sewing machine.
First stop, the green house. And it is certainly living up to it's name. 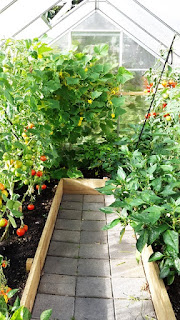 It seems like I spend a huge amount of time sweating in there as I keep the tomato vines trimmed to allow the light into the fruits.
Speaking of fruits, see that huge bush at the back there, with yellow flowers?
It's a cucumber!
An apple cucumber. I had never heard of them before I found this one at the garden center.
I'm told I could have planted it outside.
I think I will next time.
It has lovely sweet fruits, they are a pale apple green and a little rounder a fatter than the usual varieties. 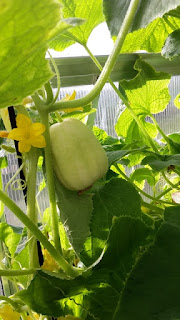 The tomatoes are still going strong and each week I make up sauces or soups and store plenty in the freezer.
And I've given plenty away. 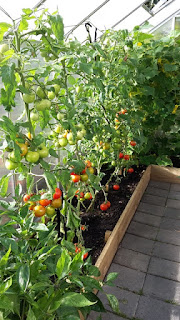 Also in the green house we have chilli peppers. They are finally turning red. Ours seem to be slow compared to Debbies, but then good things are worth the wait. There will be plenty of them I gave up counting at 40! 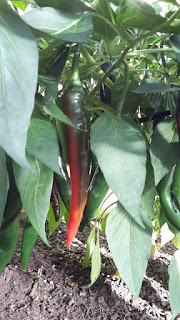 Hopefully the capsicums will start to change colour soon too. We have picked and eaten a few green ones, but it would be nice to see some other colours in there. I also have capsicum bushes outside, but they are for another day. 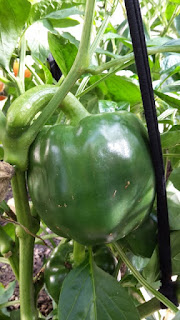 Speaking of outside. My wee veggie garden in the corner is also still going well.
As you can see the pumpkins are rampant! 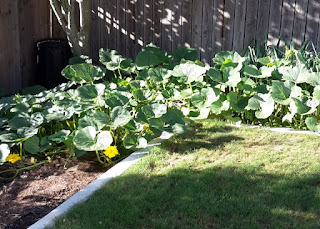 I have three varieties. I had saved seeds from some that were given to me and a spaghetti squash I had purchased. I planted them early indoors and was delighted when they all germinated. 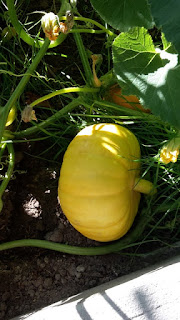 All though I planted three kinds of seed, I have four types of squash!!
I think these yellow and orange ones are the same variety, but without tracing the vines back to their origins........
Any way, if I'm right, they are called little cutie. 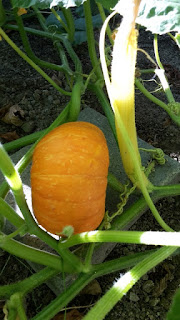 Sorry, no pictures of the crown pumpkin or the spaghetti squash, I couldn't get near them!
There are a few out there though.
My gardeners diary says that it is now time to stop the growing points on the vines and allow the plants to concentrate on the fruits. Thats a job for today. Maybe while I'm in there I can get some pictures of the other varieties.
Almost hidden by the pumpkins is the rest of the veggies.
I have sweetcorn.
They look like they are nearly ready. They are a little small, but that's ok. 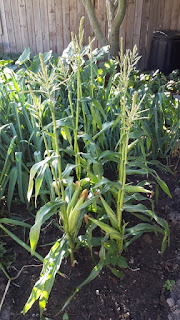 Behind the corn is leeks and beans. The beans are a little too close to the fence and not terribly happy.  But they are still producing and we've had a few to eat. I'll rethink those next year. The leeks are almost ready to come out too. There are a few I'll need to pull soon and either use or freeze. One is about to flower!
And finally.
We decided that we needed a clock outside.
Tony found this wrought ironwork with clock and temperature gauge. 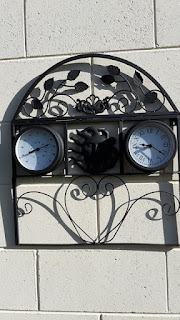 Very pretty and useful too, saves us craning our necks trying to see into the kitchen clock!
Right, I'm off to work for an hour or so, before it gets too hot!

It's a PITA already!!
Lots of thread changes and fractional stitches. 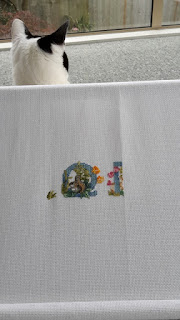 Both of which give lots of detail.
But detail can be achieved without the fractionals!
Never mind, I've started now, so I'll get on with it.
Or
Maybe this is what it will take to get me back at my sewing machine!
LOL
The design is called Woodland Alphabet. By Jamlynn.
Very pretty. 24 letters with lots of little critters and even more little flowers.
I'll keep you posted.
So will the cat I'm sure!
I tried to shoo her away, but she insisted on being in shot!

I forgot to show off this one.
Tea Rose was actually finished before the Happily Ever After sampler I showed in my last post. 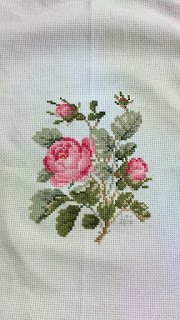 I working with letters again on my latest project.
A woodland alphabet.
Not much to see yet, I'll post a picture when I have progress.

The threads I had ordered from the US arrived just at the right time.
It's a hand dyed floss, and I can tell it's from a different dye lot to the original.
It's really obvious here in this picture, but not so much in real life.
I can live with it. 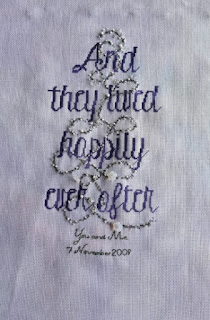 I included the names of two very special people.
And the date of their wedding. 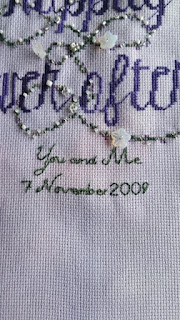 It's a bit of a private joke.
Tony reads to me each night. It came about quite by accident, but for years now I have had a bed time story read by Tony. Usually a Terry Pratchett story. :-)
But if Tony is tired, or feeling lazy, or just wants to wind me up he tells me a story he made up one night. It goes.....
'Once upon a time,
they lived happily ever after.
!!!!!!!!!!!
As soon as I saw this sampler being stitched by someone else,
I knew I had to get my hands on the chart.
I was putting the final stitches in when Tony came home from work this evening.
He was delighted.
And so am I.
*
On with the next one.

Keeping up with the greenhouse.

The recent spell of very warm weather has meant a big glut of tomatoes in our green house.
We're eating them as fast as we can.
Tomato salad with everything and sliced tomatoes with everything else.
I even gave a bag full away!
But we still have loads.
Well, had!
This morning I turned 2.5 kilos of tomatoes into soup and pasta sauces.
Yum. 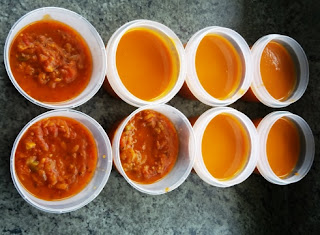 I'll freeze these wee pots and use them up over the cooler weather.
A delicious taste of summer, perfectly preserved in our freezer.
*
On a crafty note.
Tea Roses is about 2/3 done now.
And will grow some more this afternoon. 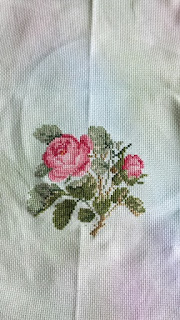 I've been able to source the thread I need for the 'Happily ever after' sampler.
It's coming all the way from the USA.
Of course I can't order just one thread to travel alone all that distance.
I had to add a few items to the package.
Hopefully it will arrive, just before I finish the roses.
Oh! And I've pulled out my next large project.
I'll show it off soon.
*
Time to sew. 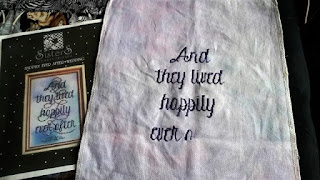 A lady who lives here in town has recently stitched this same design and has promised to have a look and see if she has any of this colour left. (It's a hand dyed colour.) Otherwise, I'll have to wait for more to arrive from the US.
*
Meanwhile the roses I showed last time, have barely moved! LOL
I'll get back to them later today and hopefully have some progress to show soon.
*
I haven't really had a huge amount of time for the fun stuff this week. I've had  quite a few chores to do between work shifts and we had a very nice day yesterday, so we were out in the garden, trying to catch up. I had a big tidy up in the green house and brought in loads of tomatoes. There is no way we can keep up, trying to eat them now, so yesterday I made a big batch of pasta sauce and froze it. When I'm ready to use it, I just need to use it like the jars and tins we get at the shops.
The leeks are coming along nicely and the spring onions are as big as the leeks!
There are lots of baby pumpkins. Some capsicum in red, green and banana yellow varieties. Some chilli peppers and cucumbers and my sweetcorn is on it's way too.
At dinner last night I was able to serve up homegrown silver beet, green beans and broccoli.
Yum.
*
Well, if I want time for stitching later I have to go do the boring stuff now.