Down in the garden.

I didn't do any more stitching on anything last Wednesday. I opted instead to clean out the fridge.
It was a nice cool job to do on a hot day. Once I was finished I sat down with a cold drink and did a little work on my brothers crochet blanket. I've done some more since and now it is no longer something small I can pick up on a hot day.
There are seven of those squares you see below, all joined corner to corner and I've started to work rows across. 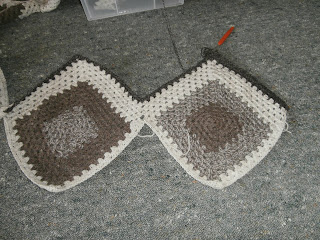 I did get back to my stitchery on Sunday though, for another slow stitching day. Tony went fishing with his Dad and his brother, so I had a day to myself. I made some more progress, working on the bird house block. As I thought, it was much easier to work on in a wooden hoop rather than on a roller frame. I may get back to it later today and tomorrow. 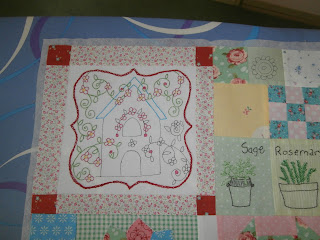 We'll see what life brings.
Speaking of down in the garden, I've just been outside with the camera. I thought you might like a look. Firstly, in the green house. Due to the cooler than usual summer we have been having, the tomatoes are a little slower than usual. But I see more colour out there every day. 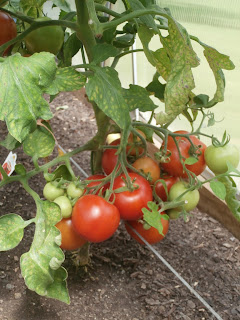 There is loads of fruit and I hope it all has a chance to ripen. We had to support these vines from the roof as we were afraid the weight of the fruit would break the stems. 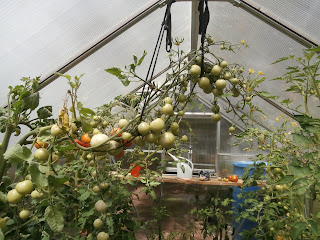 I couldn't resist taking a photo of this guy!!
I might call him Pinocchio! 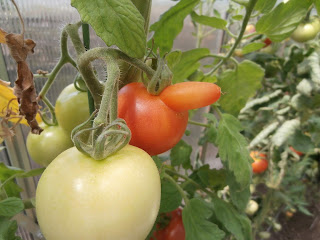 Also in the green house and in spite of an aphid problem, we have chilli peppers again.
They are also bearing fruit. 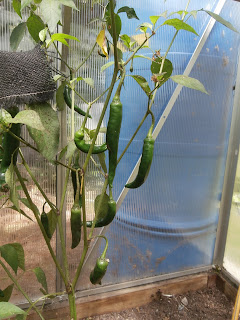 Outside, my rose bush is putting on a beautiful display 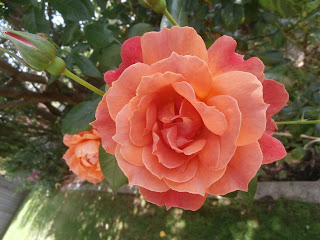 And my rather slow Christmas lilies are flowering. This one has finally opened all but four of its nineteen buds! 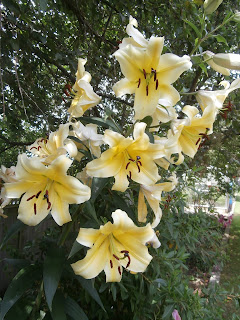 It smells divine.
I'm off to find some lunch, then I might sew for a while.

Yesterday was a very warm day here in Timaru. I'm not sure what the official records will show, but out on my deck the thermometer in the shade said 32 degrees C.
Lovely and warm. I got two loads of washing hung out and dried before lunchtime.
It was too hot to do anything much, but I got some other domestics done early, then settled in with my stitching. 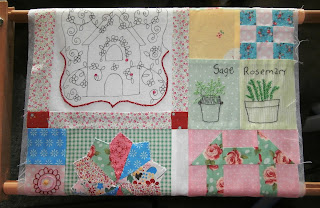 I didn't get loads done as you can see, but the herbs are finished as is one of the chrysanthemum flowers and I made a start on the main panel. I'm beginning to wonder if I might be better off working with a hoop rather than my frame. There is some chain stitch in the main panel and I'm struggling a little with it, especially just after a change of direction.
It's not quite so warm today, but I got on and finished the domestics early again, now it's me time.
I'm not sure what to do though, continue with the stitchery or do some cross stitch on my Spring Queen.
I'm itching to play with Queenie, but also keen to try out the hoop on my stitchery....
*

On Wednesday I hinted that I might be starting on a new project, and here it is.
By the end of play on that very same day I had gotten this far. 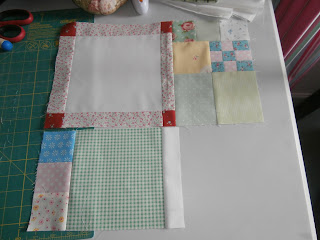 Then it was back to work. But as you know, I don't start until 11 am on Fridays, so I had time to play before going in, so I cut and made up not one but all four of the churn dash blocks needed for the project. 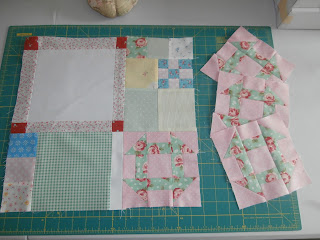 The overseer kept an eye on me while I sewed. 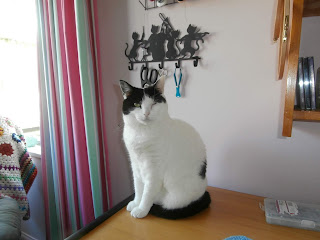 Things rested again on Saturday and I returned to it yesterday, my slow stitching Sunday.
The wee Dresden flower you see in the image below is English Paper Pieced. Something I haven't really had much of a go at before. I tried some hexies years ago and they were not very nice, so I didn't continue. So after some googling and youtubing I set about having another go. 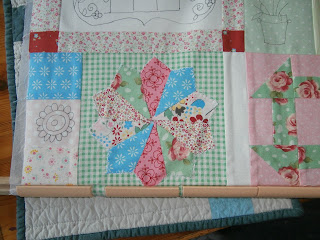 I sat myself outside in the sunshine and made me a flower. It's not perfect, some of the petals are a little uneven, but on the whole I'm fairly happy so it was appliqued into place and as you can see, block one is on my roller frame ready to have the stitchery parts completed.
*
Of course that is not all I've been up to. The green house is quite productive at the moment and I had a big bowl of tomatoes that needed using up, so I prepared pasta sauce for the freezer. YUM!
*
In the evenings I sit with my crochet. I've made a start on another big blanket.
This one is for my brother.
*
The postie brought me a package on Friday, something I had ordered from the UK.
I showed you this Christmas gift a couple of weeks ago. 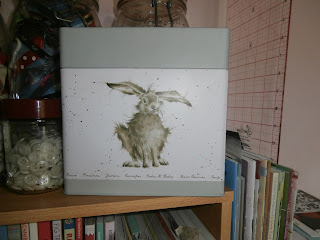 I had fallen in love with the hare character and had an inkling that I had a pattern for something similar. I hunted around and couldn't find it, so purchased one from UK and waited for it to arrive.
And here it is, my newest acquisition, Brighteyes. 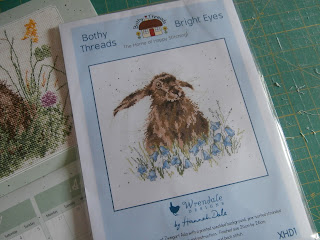 (Yes, I know, the book, the movie, rabbits not hares. But look at those ears, this guy is definitely a hare. I might rename him.)
Wouldn't you know it, on Wednesday, I found the pattern I was sure I already had! 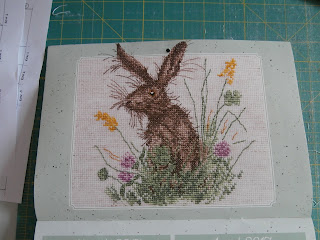 This guy is called clover.
*
Nothing has changed on my Spring Queen cross stitch. LOL
Maybe I'll get to have a go at her on one of my days off this week.
I don't start work until 10.30 on Mondays, so I'm off to do some necessary stuff and maybe I'll have time to play before it's time for work.

Something old and (maybe) something new...

So I finished the secret stitchery piece yesterday. It was a joy to stitch and so quick!
I might have to do me some more of that.
But first, back to something old. My Spring Queen cross stitch project got put on hold last year, while I stitched the Jewelled Elephant.  I pulled her out again yesterday and spent some time reacquainting myself with her and even spent a couple of hours stitching. Which was nice. 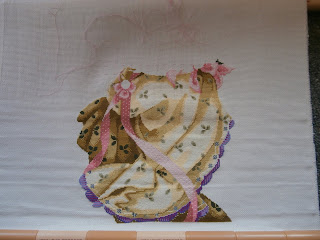 Before I did any of that however, I had a look in one of my hidey places and found these two boxes.
Way back in 2010, (I thought it was longer than that) I collected a BOM kit. and stowed them away in my cupboard, for 'one day'. 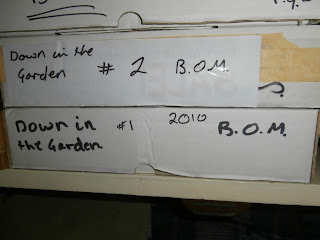 Each month I received a bundle of pretty fabrics. 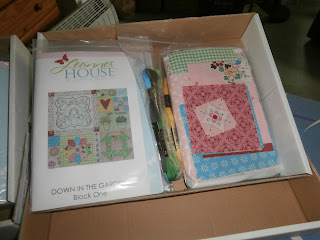 One or more stitchery patterns and instructions on how to finish each block. 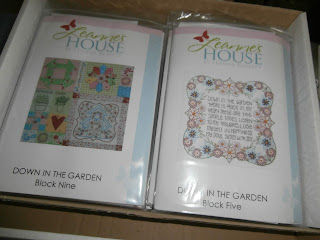 Working on the secret stitch has given me a taste for stitchery and I've been having a look through the boxes and I just might make a start on this one.
I went out today and bought some supplies.
But first.....
Domestics. :-(

Well, maybe not so lazy. I've done two loads of washing got it dried and put away.
We scooted to the shop for lunch supplies and Tony got the vacuum out as Belle is moulting and leaving huge clumps of white fluff everywhere she goes!
Aside from that, I've spent most of the day so far settled into my comfy seat, with my stitching.
I finished stitching and beading the jewelled elephant. 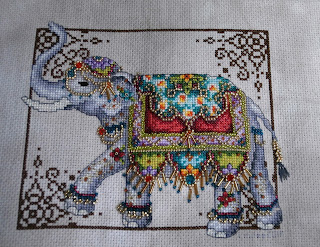 All done except four golden beads! 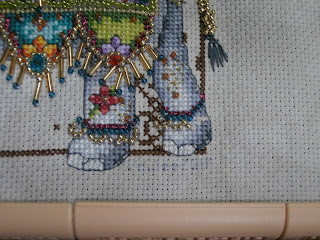 How frustrating.
Four beads!
Sigh, I've ordered more and they should be here soon.
So an (almost) finish means a start right?
I was having a tidy up in my room on Friday morning and came across a pattern that has been coming and going on my to do list for a little while.
It's finally getting it's turn.
As you can see, it's not a cross stitch, but a colourful wee stitchery piece. 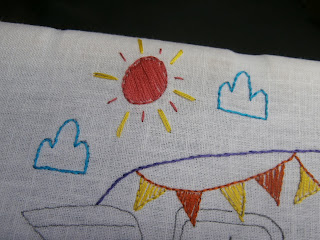 It's a gift, for someone who sees this blog.
So this is all you get.
Hmmm, I wonder if it's for you?
I have to say, I'm enjoying it, very much I love how fast it's going.
It's giving me a taste for doing more stitchery.
I've had a quilt kit stashed away (for many years) that has some pretty stitchery panels.
I'm off to make a cuppa, then it's back to my needle and pretty threads.

Tony and I took the trees and other Christmas decorations down yesterday and now the place has that bare and empty feels that follows Christmas.
I swapped out the Christmas Quilt for Spring Sprouts. 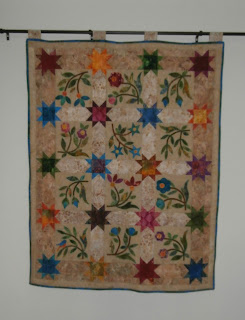 It doesn't do much to fill the emptiness, but it is a pretty greeting to anyone who comes through our door.
Belle will have to find another quilt to snooze on! 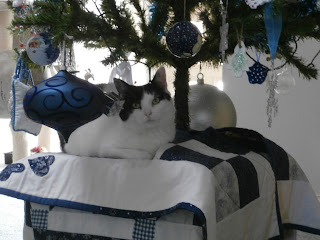 We've had some very hot days here, Saturday reached 36 on our shady deck, but Mr H didn't think to get photographic evidence. (I was at work) Yesterday was overcast all day, then we got a good amount of rain in the evening and over night.
We're back to blue skies today.
I'm off to work soon, I start at 10.30 on Mondays, which means that sometimes I get to sew for a while before going in. Sadly not today, I have one or two domestic chores to get finished. Tomorrow and Wednesday are days off though and I plan to sit and stitch as much as possible for those two days.
I see many bloggers posting plans for what they want to achieve this year.
I have no such plans, I'll just see where the muse takes me.......
*
I'm off to the washing line.

What a Difference a Day Makes

Suddenly it's a new year.
Happy New Year.
I wish you all that is good for 2019.
And a drop or two of rain!!
For those who need it.
It's not just the year that has changed. Things are looking better in our garden, especially the green house.
We did have ripe (ish) fruit on Christmas day 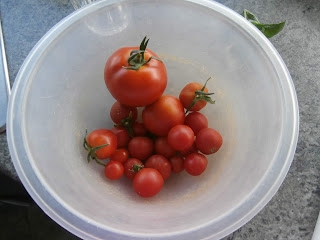 But now, a week later I have fruit that I'm happy to make tomato salad with. 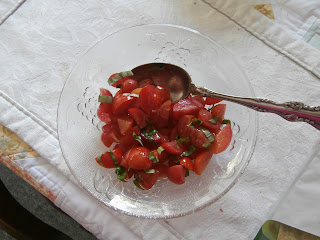 It has a much better colour and flavour than the fruits  Tony insisted on picking on Christmas Day.
The New Year has also had an impact on my stitching!
Today was the first chance I've had to sit and stitch since 19th Dec, which is when I last showed this picture. I did find time to do a little stitching that day, but for some reason, didn't take a photo. 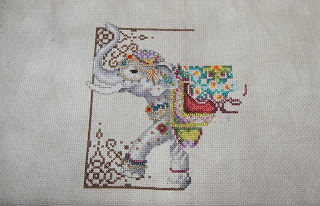 So after about 7 hours of fun today
WOW!
What a difference. 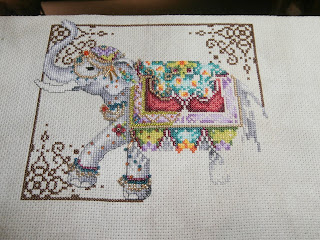