I'm off on my tour of Eastern Europe tomorrow.  The ferry which is booked to take us off the island has changed our sailing time. There is a storm due, with some wild winds and high seas, so they plan to take us early! Oh good.
*
Edited to say that our sailing time was changed again, now we leave after the storm and can have the morning at home. Oh yes, and I changed my mind, I'm taking a completely new project with me.
*

I've been planning what to take along with me. I have a little bag all prepped with a small cross stitch project, but I'm not sure how that will work out, I never tried stitching on a bus before.
So I also have another larger bag all prepped with a crochet project. You know me, I can't crochet on a small scale! LOL 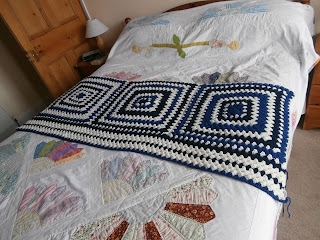 This lovely is coming along. You can't beat the good old Granny. I know I can do this on a bus, I took another giant along last year and did actually do some to it.
I'm not following any particular pattern here, but I did take some inspiration from this blanket. I like the fact that there is no foundation chain. :-)
I joined the squares together as I made them, then made rows along one side. Simple. The blanket in the (Third) link was made in the same way, with rows of smaller squares.
*
I did ask himself if we would be taking the laptop along with us, but didn't get a response, if we take it, I'll keep you updated, if we don't... I guess I won't.  LOL
*
Right now, we seem to be in the calm before the storm, so I'm off to do some washing and get it on the line. Then I had better sort out what clothes I'm taking!

I got busy up in my playroom this morning and put together these two stockings. They were off a panel I found on evilbay. I had hoped to use the 'patchwork' pieces as backings, but alas the two patterns were quite different in shape and size once I got them cut. They had to go as you see them here, which means the backs are a mirror of the fronts. 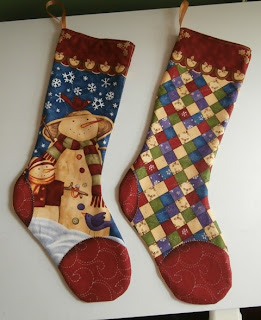 I pulled some fat quarters from my stash to use as linings and added a golden loop of ribbon for hangers. No quilting on these ones, just the printed outer and a pretty lining. :-)
This afternoon I cross stitch some more of Santa.

Look what I found

These beautiful cross stitched poppies were in the window of the charity shop today. I spied them when I scooted out for bread. I couldn't leave them there. 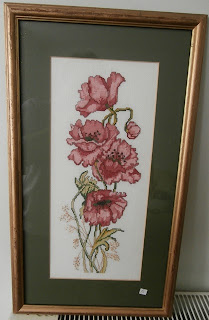 The frame does need some attention, well OK, it needs replacing, but at £5, they had to come home with me. Whoever stitched them, didn't even sign them, what a shame, all this beautiful work.

My DH finally has his redundancy date! Yippie. As of November 29th he will no longer be employed. WooHoo!
It seems strange to be celebrating redundancy, but for us it's a great thing, we can start to move forward with our plan to move to NZ. For Tony it will be a home coming, for me immigration to a new life. So looking forward to that.
It will probably be into the new year before we make the move though. The receivers of the company Tony works for may require him to stay on as an independent contractor, for a large fee of course. Plus trying to get everything finalised before Christmas would be a bit of a pinch. So I'll get one last Christmas here with my family. :-)
*
Speaking of Christmas, Santa has moved along some, he must have, I wound him on a little. LOL
The hares are all back stitched and I made a start on back stitching other areas too, Santa's legs are mostly done now, as is the seat of the sled. Time to switch back to the left of Santa and get those trees finished off. 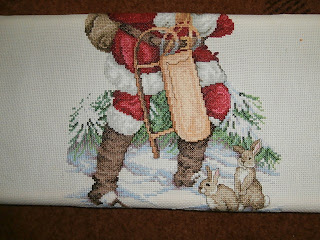 Can you see the nasty rusty needle mark there on the right?
I picked out the beginnings of the red border, I like him with out it.
I see no reason why he shouldn't be finished by Christmas.  :-)
As you may remember I've been stitching away on a surprise for someone who doesn't read my blog, that is progressing slowly too. Both projects will go on hold soon though as Tony and I are off on our travels again. We're going on the Grand Explorer Tour of Eastern Europe.  I do have a smaller project all set up to take with me. I'm not sure how much of it I'll do, we'll see.
*
I'm off to stitch on Santa while I watch the Italian F1.

Look what my beloved found for me. There are some lovely designs in this magazine. Yes, I know it's last years, I am keeping an eye open for this years, but this should inspire me for a while. I especially like the design flashed out by the camera! Didn't notice until now. Doh! 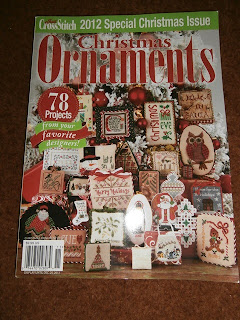 More secret stitching, but I can show this one here.
Not that there is much to see at the moment. 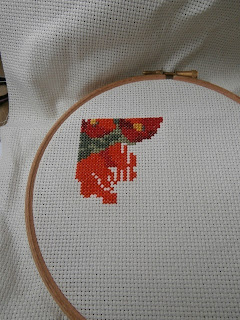 And Santa finally has two hares, who according to my son are "at it". LOL
I'm almost at a point where I can start getting some of the back stitch done . 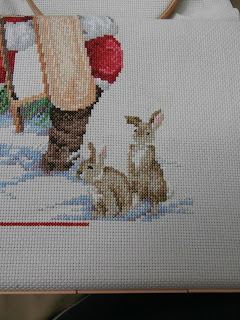 I know some people believe that the back stitch should all be left until all of the cross stitching is completed. The previous owner was obviously one of those. I'm not one of those people. I like to get an area completed and back stitched as I go. That way, once I'm finished, I'm finished. To me it feels like starting all over again, having to cross stitch the design, then go over it again in back stitch.
*
No batik update today. I did start the trimming process, but my back was complaining about the height of the table, so I stopped.
*
Where is everyone? My stats tell me that 20+ people visit my blog almost daily, but hardly any of you stop to comment. Did I put you all off with all this cross stitch? But I know I have stitchy followers!
Sometimes it feels like I'm talking to an empty room. Please stop to say "Hi".
*
Time to get domestic for an hour, then play.

I've spent a little time upstairs playing with my Batiks in the last couple of days. It's been fun.
I finally finished putting the blocks together. Here they are, all pressed and waiting for a quick trim and tidy up. 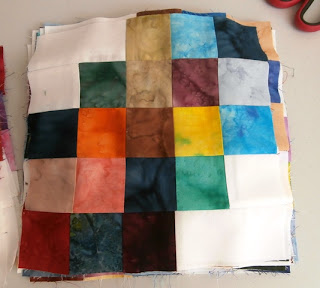 But first I couldn't resist a play.
Can you tell what they are yet? LOL 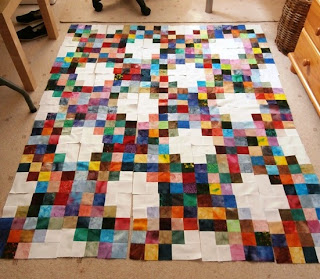 This is only about two thirds of them, I ran out of floor space. I shall have to make the top in two halves and be very careful about ensuring correct placement where the two meet.
I may not actually use all of the blocks, I'll have to double check, but I think one more row would make this the perfect size for my dining table + one extension panel.
What do you think Janice? I may even be able to add two more rows and have it large enough to cover the table when it's fully extended, and still have left overs to make a matching runner for the dresser.
Janice and I talked about quilted table covers when she was visiting. I had pulled out this quilt to use as a table cover one evening as I had nothing to fit the table with one of it's extenders in place, and charming stars has also been used as a table cover. I think I've found me a whole new reason to make quilts. DH would agree, he spent many, many hours working on the table with Mum, they took it back to bare oak, before varnishing it to perfection. Quilted table covers will protect it beautifully. :-)
*
The Santa cross stitch is progressing nicely. He has one and a half hares, but still no head!
I'll post an update in a day or two.
LOL I'll try to ensure he gets it before Christmas.
*
I'm off to find my long tape measure.

Some progress with Santa.

But first a quick recap. As I mentioned a few posts back, I adopted Santa as a WIP/UFO.
This is the cleaned up version of what I received.  I believe he had been in a house fire, he was very grubby poor soul. I cleaned him up as best I could. He had a good hand wash and I even left him soaking for a while in some vanish! They are not so obvious here, but there are still some marks I just cannot remove. There is a rusty needle mark on the right and two hoop halos, not to mention some unknown liquid stains.
Poor Santa. 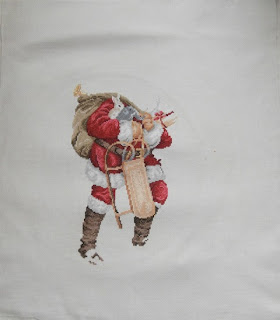 So the other day when Janice was here I mentioned to her that I was planning to cut the border down into bite sized chunks. (It's very repetitive and has loads of back stitch.) I also mentioned my hope that most of the stains would be covered by the remaining design. Well, Janice made the wonderful suggestion that I need not actually stitch the border! The border design around the main picture is actually that of a picture frame and some holly, and as I will be framing it anyway.......
Why didn't I think of that?
Plus, removing the border wouldn't take anything away from the main feature. Lets face it, Santa is the star here.
Janice also suggested tea dyeing, once I'm finished, as a way of hiding any remaining stains. I'm not so sure about that idea, there isn't a huge amount of white, considering he is walking through snow, even the aida is off white so it may be OK, I'll see how he looks once I get him finished.
As you can see I made a start. Right at the bottom.
As I said even though he is stood in snow, there is very little white. Those drifts are made up of very pale blue and lilac! With a sprinkling of sparkly blending filament. That weird blob on the right there is the beginnings of a hare. 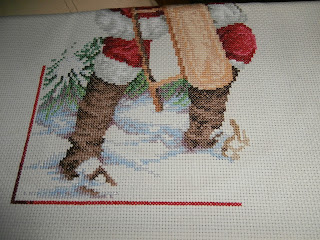 The first picture was taken with flash, cause it's pretty dark here this morning, then I turned the flash off to see what it would look like in natural light. LOL Neither one is quite right colour wise! 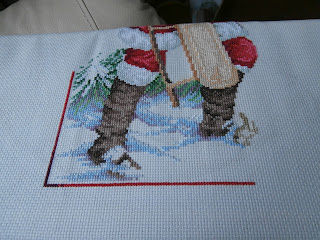 Hmm, I'm not sure I even need that line of red stitches, I may even pull those out.....
*
Janice and Mick are on their way home. I'm sure they enjoyed their holiday here, I know I loved meeting them again, it was great to be able to spend so much time together. We talked about how easy it would be to get together once Tony and I are in NZ. Maybe we'll even manage to meet up more often that every two years! LOL
*
The contact lenses went back to the optician!
Never again!
They were so uncomfortable and didn't settle in at all, I only wore them for a few hours but I had 'swimming pool' eyes for two days.
I'll stick to my specs.
*
It may be overcast and dark, but at least it's dry. I'm off to put the washing machine on, throw the vacuum around, then it's play time.