Not such a quick stitch then!

I mentioned in my last post that this would be a quick stitch.
Wrong!
I'm still not stitching as much as I used to.
And I spotted a mistake and had to rip, rip, rip it out!
Not all of it, just most of the middle section of wing. 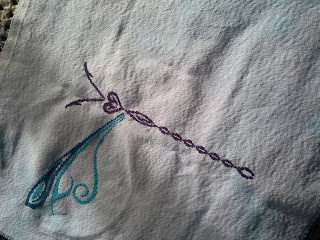 The ripping took almost as long as the stitching.
Oh dear, never mind, it's the journey that counts, not getting there fast.
Lindsay was spot on with her suggestion that it may be the dragonfly, by Sparklies.
You can't really see it in my pictures, but the fabric I'm stitching on has the prettiest sparkles all through it.
I think I have resolved to do another letter in the alphabet after I finish this piece, then I have another larger project lined up. It's chart is spread over several pages, so maybe if I'm disciplined with myself I can alternate between the two for a while.
Ha! as all crafters know, plans can and do often change!
*
Work in the garden has slowed considerably.
Though I do seem to be spending quite a bit of time with a rake in my hands.
Leaves on the lawn is not good, especially if we get a bit of rain.
And there seems to be a plentiful supply of both at the moment.
I think I need to build a compost area.
Tony disagrees!
*
A day off work today, but I'm trapped at home awaiting a delivery.
I saved a few jobs knowing this was due to happen.
Then I'll stitch.

Can you tell what it is yet?
LOL 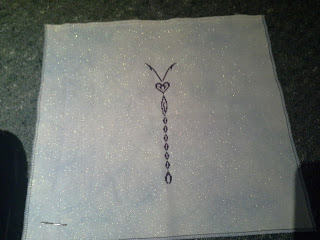 It will be a quick stitch, but thats ok, it will keep me going while I ponder what to do next.

Tony has been working hard in the garden the last couple of weeks. I didn't get a true before picture.
But on the first image, you get an idea, that flattened earth by the green house door was just that, earth and crusher dust and lots of weeds. Tony worked hard to get rid of the weeds and level it all off.
He did a great job. 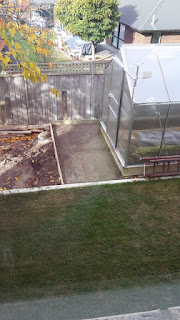 This week after watching a 'how to' on you tube he laid the paving. 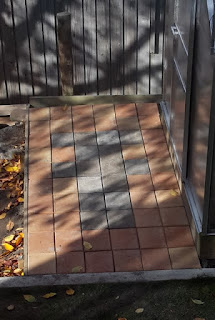 The grey pavers we have collected together, they were lying about the property, the previous owners must have had a few too many.
We couldn't get more grey, but did find the lovely orange/red ones in the garden centre.
On special as they are end of line!
While Tony was working, the wind was getting up and this tree tested his patience. 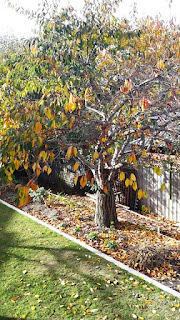 As fast as he was removing leaves from the prepared surface, more were blowing in!
Cute pattern though. 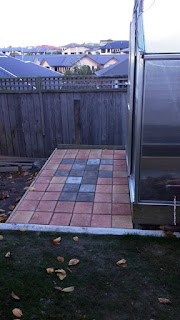 As the edge between the lawn and the base of the green house is not only much slimmer than a single paving stone and also narrows to one end, we have opted to line the ditch with some weed suppressing membrane and pile cobble stones in there. We'll do the same along the other side too.
At the other end of the green house (Sorry forgot to take a picture) We need to do some more work, before we pave it and put in a water collector.
Gotta go, house filling with guests.

Come for a walk?

It's been a while since I took you along for a walk.
As you know, I love to walk in the scenic reserve.
It is so pretty in there. The day I took the camera along was lovely and warm, the sun was shining and there wasn't a cloud in the sky. 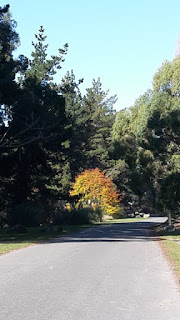 The birds were singing and the crickets were chirping. 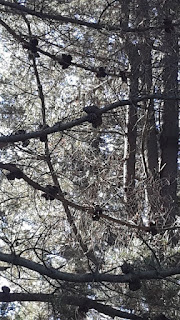 Sometimes I find huge pine cones on the ground, but not this time, they were all up in the trees.
I also see toadstools, loads of toadstools. And lots of different varieties too. 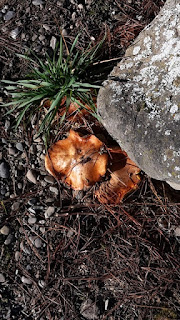 Some trees are ever green, some are still green and others are bare.
But there are some trees that have beautiful autumn colours. 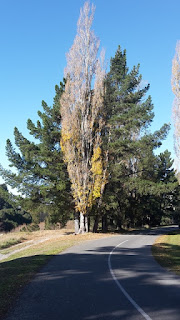 I love to see the reds and golds. 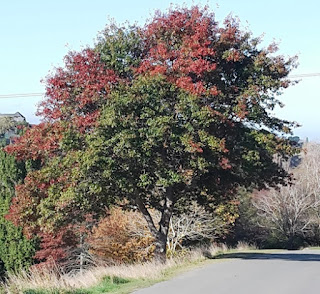 The road is kept clear of leaves, but the trackways and areas along the road are carpeted in crisp autumn leaves. 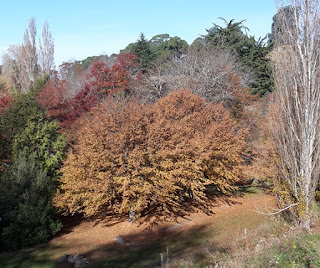 Love the dry autumn we're having. Much nicer than the wet soggy autumns I remember in the UK. 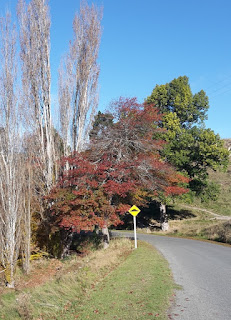 Of course the cooler autumn evenings meant that we have on occasion turned the heating on.
And that needs to be inspected. 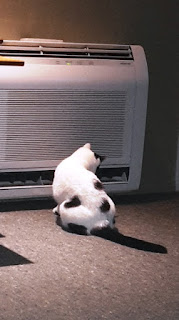 At one point I thought she was going to try to get inside the thing!
*
I do have garden news, but will save that for another day.

Do I need another blog?

Recently I've been considering whether or not to start a second blog.
This is supposed to be a blog about my crafting exploits and so far this year, it's been dominated by our gardening exploits!
What do you think, should I continue with things as they are, or have a separate gardening blog?
Meanwhile....
Work continues in the great outdoors.
And finally we are ready to begin replanting. 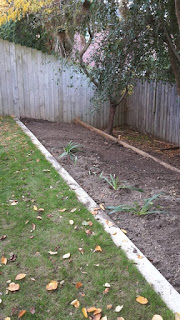 As the property slopes away toward the rear boundary we decided to put in a low retaining wall, in an effort to keep the earth where we want it. Nothing too fancy as, if things go according to plan, we won't be able to see it anyway. 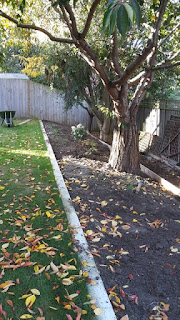 It stretches along the Northern half of the rear boundary fence as far as our green house. 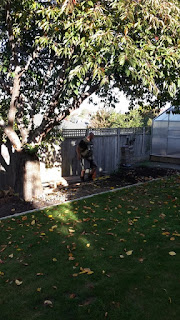 Over the last two weekends we have begun replanting. What a wonderful feeling after all the chopping down and digging up. 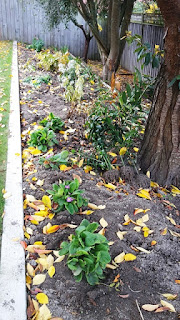 We've put in agapanthus all along the new back edge and I'll slowly add more plants as I rescue them from elsewhere or purchase new. I already rescued primula from another area of the garden, they were moved to the front and have been moved again to their forever home under the cherry tree. Some peony and alstroemera have also found their way into there too and quite a few bulbs.
Of course all that activity is too much for the overseer and she had to go for a lie down! 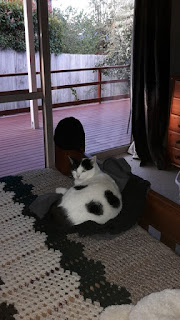 The green house was stripped out a couple of weeks ago and I was amazed at how much was left in there. 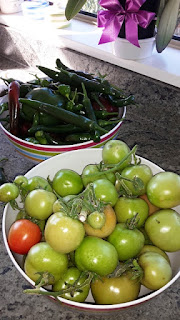 I stripped the green tomatoes and the chilli plants.
The chilli I have cut back and wrapped in frost cloth, hoping they will survive the winter. Something I didn't know was possible! We came across the idea on the WWW and thought we would give it a go.
The chilli I harvested have been frozen or preserved. 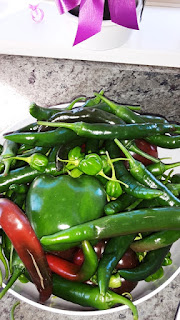 The green tomatoes went into a pan with some red onions and apples.
They stewed for a while, with sugar and vinegar. 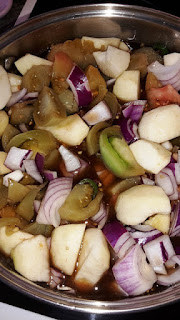 And became 9 big jars of chutney. 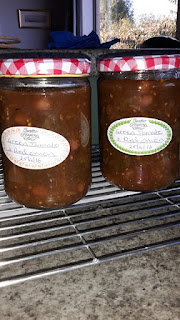 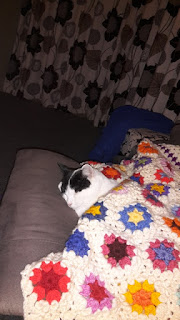 It's very difficult to crochet when the cat is on the project.
Even when she is under it.
She gives me such looks when it's time to turn and go back the other way!