As I mentioned in my last post, Tony and I had a full on weekend.
On Saturday we set off with other family members for the long dive to Dunedin, stopping on the way at Moeraki to check into our hotel and to drop bags and boots. We then carried on South and grabbed dinner in Dunedin before watching the All Blacks play France. We were pretty much first into the stadium and took photos before it filled up, later we were too busy watching to think about pictures. 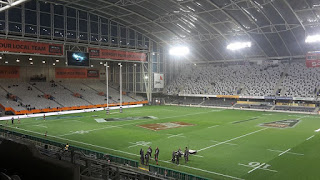 It was a bitterly cold evening, even under the covered stadium. But worth the cold to see a great game. We won, of course!
After the game it was back into the car for another hour back to Moeraki. There were a few celebratory drinks, but not too many as we had to get up early the next morning to be at the wharf by just after 7am. The sun rose as we steamed out to sea. 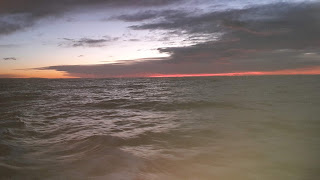 There was a pretty dense cloud cover which made for a greyish day. 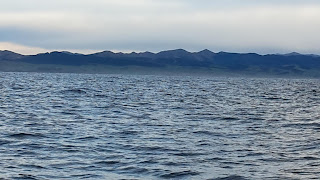 But that was ok, as we had plenty to keep us busy.
Here you see a species of Perch, also known a Jock Stewart to local Kiwis. 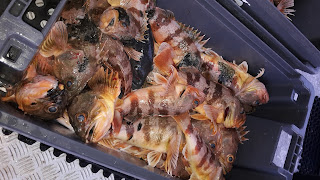 There were twelve of us aboard and between us we caught four big boxes of Jocks, a whole box of blue cod and assorted other species.
If you turn your head sideways for the next photo, you will see that Tony caught a parrot fish or scarlet wrasse, it went straight back in as they are too bony to keep. Pretty fish though.
That wasn't the only fish he caught. LOL I did contribute to all those boxes. 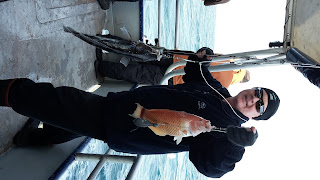 His brother Stephen, also seen sideways here, their dad and I all caught our share too. 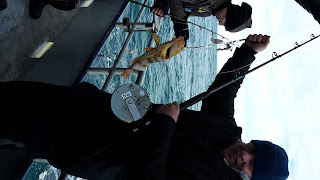 As the morning drew on things brightened up and by the time we returned to the wharf at 1.30 pm the sun was shining. 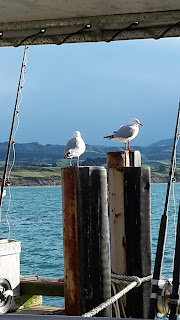 We were followed throughout the morning by numerous seabirds, all waiting for their share of the catch. 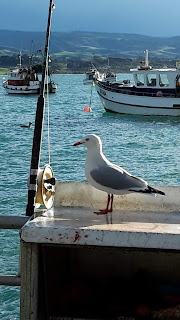 I couldn't count the number of albatross who followed us home.
There were dozens. It was wonderful to see them. 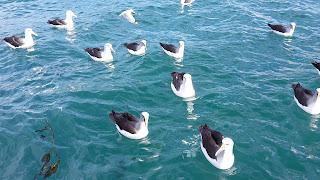 After the long drive home there was only one thing to have for supper! 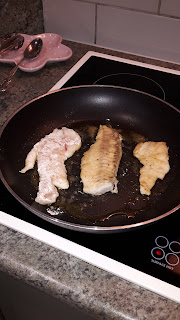 We brought home between two us almost 10 kilos of fish fillets. Which is all bagged and tucked into the freezer.
*
I did take my crochet with me, thinking I would maybe do a little as we were driving, but alas, not a stitch was made. I was too busy looking at the scenery and joining in with the conversation.
So instead, I'll show you another small finish. I made this wee hat on my day off last week. 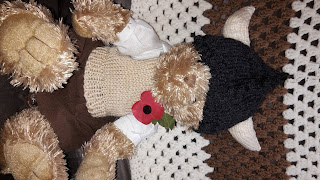 Oops!
For some reason blogger insists on turning pictures from my phone onto their sides!
Anyway, Grandson Floki, (him with the viking name) needs a viking hat doesn't he?
I know his mum and dad will love it.
Modelled beautifully by teddy of course.
In spite of an early night last night, I was exhausted at work today, so I think another early night is in store again tonight.
**
Edited to add....
Whats with blogger? It used to forward your comments to me, but that's not happening any more...

It's been all about work recently. As you know, I've had extra shifts, which is good for the bank account, but no so much for crafting time. I do sit and knit or crochet in the evenings though. I've made some more granny squares for Jiffy's big blanket and his son Floki will have a warm head when the Northern winter rolls around again as I finished his blue hat.
Here you see it beautifully modelled by Hero Teddy. 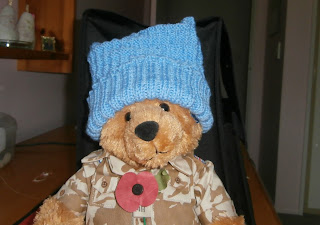 I'm off out to the crafty shop today, to get some more yarn for another hat.
I might just have to make him a Viking helmet. LOL Well with a name like Floki I have to don't I?
*
I have more extra shifts confirmed for the next few weeks and also some great social outings too, so I don't see a lot of crafting time in my near future.
This weekend we are off to Dunedin to watch the All Blacks play France.
(You all know who the All Blacks are right?)
Then, instead of coming home we are staying over for the night and going fishing for the day on Sunday. Father in Law has chartered a fishing boat out of Moreaki. I'm not sure about the fishing, but I am definitely looking forward to the game.
I might pop my crochet basket into the car for the long drive down and up again.
*
Right, chores.
Then I get to go out wool shopping.

Oh, My goodness, it has been three weeks!
I had no idea I was away so long.
I guess work and life got in the way. I have been doing extra shifts at work, with two staff members away for a month. That may continue into July, we will see. We've also had a busy time of it away from work too, with days and nights out. But all of that didn't stop me from finding time to craft.
Something I've wanted to do for a while is make a Carpenters Wheel quilt. I opted to use pretty rose fabrics for that one, I've been collecting them for so long, that now I have far too many! LOL I think maybe a pieced back will help to use them up. But first I must finish the front. Here you see all the rows completed and waiting to be sewn together. 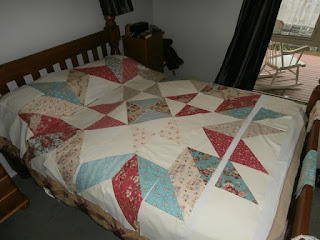 That was a week and a half ago. It hasn't changed. I did number my rows and get it off the bed though. I'm planning to add a border of some kind, not sure exactly what, beyond more roses, as I'm making this up as I go.
Inspiration will come to me.
Next up, DS Jiffy Jonathan has been asking me to make him a lovely cosy crochet or knitted blanket. So I started to collect lovely cosy yarn and eventually made a start on said blanket. I plan to make a whole heap of smaller squares and join them all together. 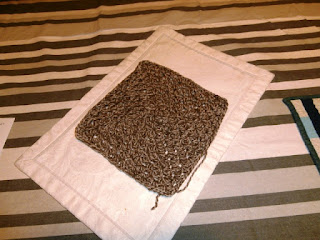 Or maybe I'll just keep on going around and around. Hmmm, I'm making this one up on the fly too! LOL I'll keep you posted. (Sorry about the quality of todays photos, it's still dark here so I had to use the flash, but I really wanted to get this done, before the day gets started and you got sidelined again).
The blanket was interrupted by more than indecision.
Debbie and I had a day out in the big city last week and I purchased some yarn, which I came home and began knitting with on the same day.
So I now have a wee hoodie ready to send to grand son Floki. 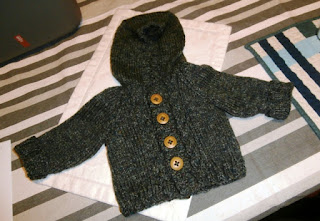 And soon he will have a blue hat too! 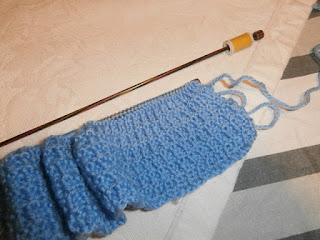 Of course throughout it all, my trusty adviser was there to help. 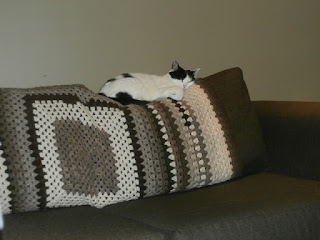 My cross stitch has barely moved since my last post. Poor thing must be feeling neglected, I'll get back to her, once I get some other stuff out of my system.
I have a day off work today that isn't packed with other things that need doing, so maybe I'll get a chance to catch up on reading some of your blogs.
But first, a few chores around the house.
And finally, because I can, a picture of my little Viking and his proud parents. 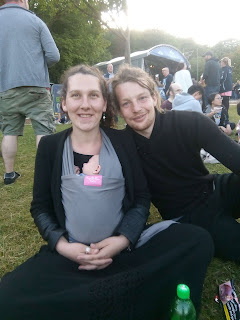 Jiffy shaved off his whiskers!! But he assures me he is growing them back. Phew!! I never thought I would say it, but I had gotten used to them and grown to like them, and thankfully Josie agrees.
And because you can't really see him in the above shot, here he is. 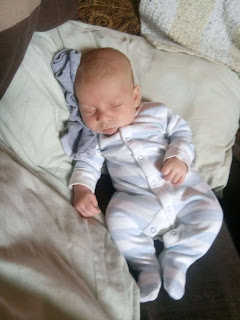 Gorgeous wee man.
Well, that's my news. I'm off to do my chores.