We're back. Phew, that was an epic trip. As I said before we left, that wasn't a relaxing holiday. We were up before 06.30 most days and frequently on the road before 08.00. We has a fantastic time, despite the content of the tour. I won't bore you with billions of photos. Between us we took nearly 1500. Maybe once we've had a chance to sort them out a little I'll post some pretty scenic shots.
For today you'll have to settle with proof that I really did do some crochet. We had beautiful weather for most of the way, so it was pretty hot under a blanket, but I managed 16 rows. 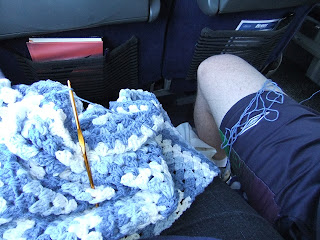 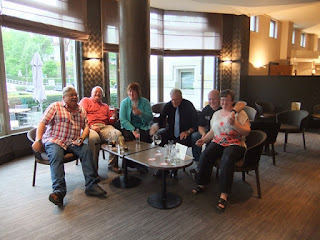 The Dark Side.
So called because the boys took a liking to the very dark German beers.

I'm glad you had a great time on your trip. Looking forward to seeing some happy snaps. Well done on achieving some crochet, unlike me who just takes my stitching for a nice holiday, but never get it out.

Glad you're back safe and sound with good memories - and a bit of handwork completed too!