Minnie Cooper and I were busy again on Sunday. We had great fun making up some Christmas stockings. These two little cuties were made string style with some scraps of Christmassy fabrics. They were fun to make, but the tops were a little bit fiddly, I think if I do any more of them, I'd enlarge the pattern a little. 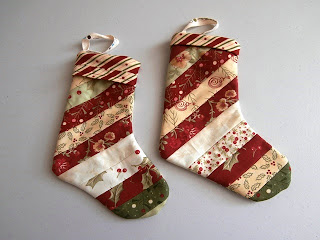 I also had fun quilting this lovely. Minnie Cooper behaved impeccably, as I used a variegated golden thread to follow the outlines of Santa and the gifts. 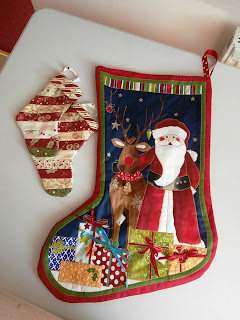 It's not really clear here, but Rudolph has a real bell sewn on to his collar and I also added some scraps of ribbon to the gifts and tied little bows. At 30 ish inches tall, it's going to take some filling!
I'll be making more stockings as I have the other half of this panel to play with and my Hunney has bought me some others to play with. When I'm done making stockings for everyone else, he says I have to make one for me! And he will fill it.
*
My cross stitch hasn't moved at all since the last photo update! But I'm all set to spend time with her today, so that will change. There is lots of sparkle in her wings.
*
Upstairs in the play room, Minnie Cooper and I opened up a fabric roll of Batiks. I also added some batik off cuts cause I didn't have 1.5 rolls of strips!  I carefully followed the instructions and made a bunch of 'strip sets', I was having sew much fun, the afternoon just flew by and dinner was late!
So I'll be up there later with my iron and my camera.
*
I'm off to stitch.

looking good and getting ahead of the seasons xx good for you x Make a BIG stocking for yourself!!

I had to smile at your Minnie Cooper- that is a brand name for hand made shoes here in New Zealand!

You are well ahead of the game starting on Christmas projects! Panels are always good fun.