I've been having fun with my sewing machine again. I spent most of Tuesday busy with the blue advent panel I showed last time.
I folded up the pockets and stitched across the tops. 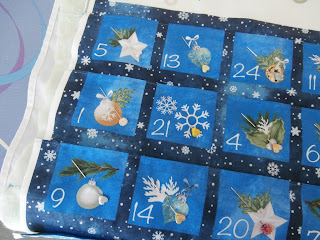 Then layered and pinned all three layers. 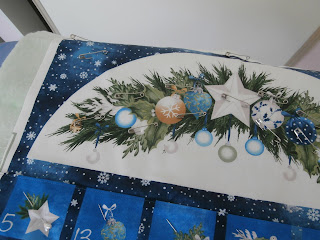 Before lots of straight line quilting, with the odd kink, because I forgot to put the walking foot on for the first lot! LOL 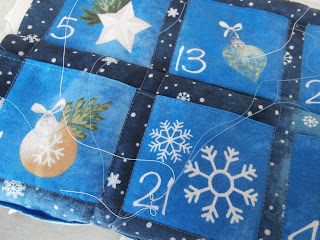 I had some fun with the star, but opted to leave the other baubles alone.
I will however be adding some 3D bling in the shape of pretty ribbons. 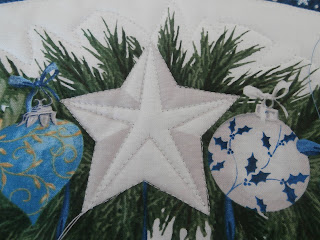 Despite what you see in this picture, it is now bound and awaiting a hanging sleeve. 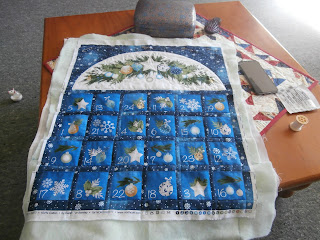 And I achieved all of that in one day!!!
I didn't sew on Wednesday, but I did go out with Debs. We visited a couple of needlework stores. Our first stop was at The Pintin in Geraldine, where we were both disappointed. Previous visits to that store have been very inspirational, and unplanned purchases were often made, but this time the place felt half empty, stands that are usually dripping with kits and samples along with suitable precuts were stood almost bare! Shelves that used to be bursting with colour coordinated fabrics had empty spaces and some bore only samples made from fabrics no longer available. Debbie bought nothing and I came away with only two fat quarters.
The second store was better, we came back into town and visited The Timaru Sewing Centre. It is more of a dress makers store than a patchworkers, but I was able to find what I was after.
I now have enough blue fabrics for another large project. (More about that on another day). I also purchased a ruler work foot. Remember I said that I had purchased the advent panels online as the local store didn't have any? Well the online store sent me a catalogue, in it were quilting rulers, in the blurb for said rulers it suggested that I look at a this youtube page.....
Inspired!!
I want to try that....
I do have two small quilts awaiting their turn on the frame.
But I didn't purchase any rulers yet.
*
Have you noticed how there are not so many crafting magazines around these days? Inspired by flicking through the pages the catalogue I had received  I went looking for some magazines last week, I thought that if I can't get on a do what I want because of my arm, then maybe I could read about it.....
After three different shops I did manage to find one British quilting magazine, for which I paid a HUGE sum and a knitting magazine too. The quilting mag came with a log cabin ruler, something I have not previously seen, and a wee booklet on how to use it. I have made log cabins before but I would actually like to try out the ruler. So I'm telling myself it was worth the extra money as the magazine itself was rather disappointing.
The knitting mag was little better. It also had freebies, in the shape of two pattern leaflets, but like the quilting magazine it was also disappointing. I guess it is a sign of the time, with everything so readily available on the internet, magazines are finding it hard to compete. I do love to flick through the pages though, it's somehow more satisfying than scrolling through pinterest and Ravelry.
On the knitting front...
I am still managing to knit a row or four now and again. I dare do no more than four at a time though as that hurts. 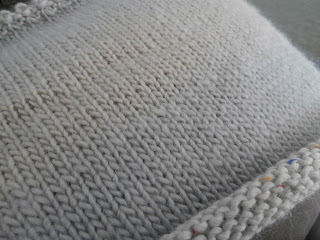 I'm trying again to show the variegated yarn, but it is so subtle I just can't get a photo of it.
yes, there are also tiny rainbow flecks of colour in there too, but not all the way through the yarn, only here and there, like another dimension in the variegation. I have a couple of hours before I have to go to work, I might go play in my ribbon jar....

Hi Loulee wow your advent calendar is amazing ,love the blue its so pretty,well done my friend .
Sounds like you had a lovely time with Deb,hope you have a wonderful weekend Loulee xx

I know what you mean about magazines. Where newsagents had racks of them, now there are just a little few. "Express Publications", which published the majority in Oz, no longer exists and "Homespun" has gone to bi-monthly. US and UK ones are very expensive with the exchange rate as it is. Even then, as you say, there isn't a great deal of inspiration. I think we are being spoilt for choice with what is online, and so much of it free, and, decluttering being the trend, no one wants magazines on the shelves at home any more.

On a more positive note, the advent calendar looks great and have fun investigating quilting rulers.

PLeased you have managed time at the sewing machine and hopefully it didn't tax your arm too much.
I know what you say about the quilting magazines, haven't found any these days that I like enough to subscribe too. Our local library has some, so I could perhaps borrow some to flick through when the fancy strikes me.