The gritters have been busy here on my little island. We've had pretty much a week of snow and ice, mainly on high ground and in the south of the island, we up north have only had light dustings. The roads are not the only place to receive sand and grit. I feel like that's whats in my hips just now. I tried to potter in my sewing room, but it just wasn't working. I think the getting up and down between the sewing machine and the ironing board was too much. There was no way I could get down on the floor to layer and pin, so I gave up and got on with my knitting. Pottering is still ok though, so long as I stay on my feet! Mum dragged me out the other day, we did some slow Christmas shopping. I think she was a bit disappointed as we only visited half the shops she had planned, I just couldn't keep up with her, and she found it amusing watching me go up and down stairs!
*
So, the knitting has progressed somewhat. The navy blue scarf is finished, I need only to make a hat to complete that set. I was ready for a change of colour though. Remember I made the Cadburys purple bag? Do you know what colour of chocolate wrapper this one is? 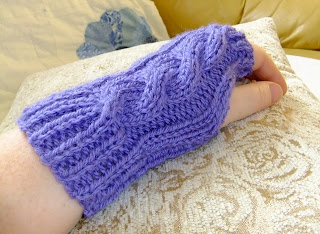 I think it's a Swiss brand, I know it's called Milka! Two little wrist warmer mittens were made last night, I need to get on and make hat and scarf in this shade too, but I decided to have a bash at a crochet star/snowflake. You'll notice there is no picture of that...........For today's project, I'll be watching youtube videos. LOL

I do hope your hips improve. The cold weather wouldn't be helping either. Someone will be lucky to receive some snuggly goodness this Christmas as a result of all your knitting.

Hope you're feeling better soon. Someone's in for some lovely war gifts.