Two new starts and Zooming along.

Chookyblue had another of her world famous Zoom parties yesterday. They really are fun and a great way to sew along in good company and to meet new friends. I joined in late as I had stuff to do. As usual there were different folks in and out all day.
Here are just a few of us. 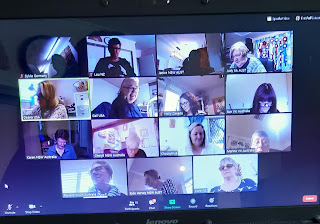 I got on with various things throughout the morning. I pulled out this lovely pattern 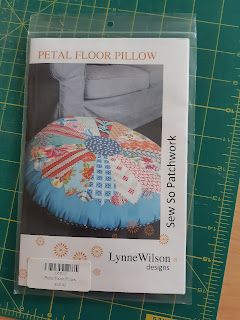 and yellow fabrics and made a start on the cutting,  then I cut butterfly bodies for my RSC blocks. I also got on with some secret stuff.
Then it was lunchtime and time for Tony to try and sleep as his two night shifts this week fall on Saturday and Sunday.
So I shifted camp into the sitting room as my sewing room is right next door to our bedroom, and apparently a zoom stitch along is very noisy!! I sat listening to everyone chatting and even managed to join in while I was busy with Jack the ripper! Un quilting the last couple of rows I had done on the Purple turning twenty quilt. If you remember I was having tension issues. I pulled it off the frame a while ago but just never got around to the unhappy un quilting part.
I had just finished doing that when Tony surfaced from his snooze.
So I folded it up and dumped it on the arm of the couch, grabbed the zooming laptop and headed back to my sewing room.
I made the petals and the centre for the sunflower and started to put them together. 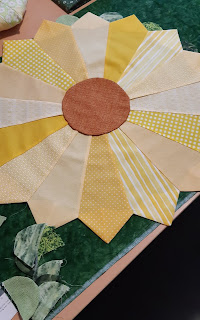 I have a choice of greens for the back ground but by now it was getting dark and I didn't want to make colour decisions with the room light on. So I put my lovely sunflower to one side and started to applique bodies onto butterflies, using the blanket stitch setting on my machine.
That was going all fine and dandy until the thread ran out! 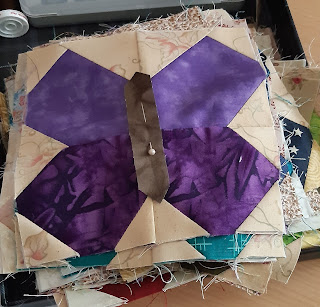 Made even more frustrating by the fact that I had only two and half bodies to go.
I see a trip to the store in my near future.
It was at that point I decided to call it a night and said good bye to the girls and headed back to the sitting room to have a glass of wine and read my book for a while, where I discovered that someone had made herself comfortable on my half quilted quilt. 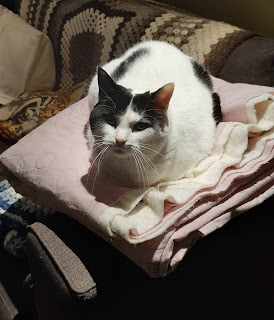 A few pages of book later and she was really settled. 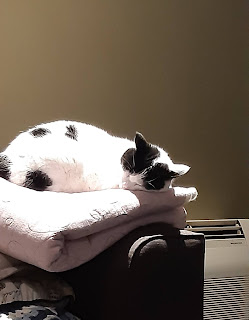 Menace!
So there you have it, a rather itty bitty day, but I did make some progress.
*
In other news, I've been working away at some secret stuff, not Christmas ornaments this time, but other Christmas stuff, which includes buttons. LOL
And speaking of Christmas.
I made a start on St Nick. The fabric is a piece I ordered especially for him from a local dyer it's called Snow Drifts. I wanted something that looked cold and wintery. I think I got it. 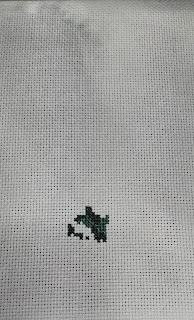 If I'm reading the chart correctly, this dark green blob is part of a holly garland. Hopefully I'll get to sit and stitch some more of him today.
I've been busy in the kitchen all morning making lunch boxes for the freezer. Tony loves mince and potatoes, so a big batch of that was portioned out ready to freeze, I also made up a chicken curry and rice which was also divided into lunch box portions. They are handy to have as a back up for those days when there are no leftovers to take. That should keep us going for a couple of weeks. All we have to do is grab a box from the freezer and head out of the door to work.
And of course a new slice. 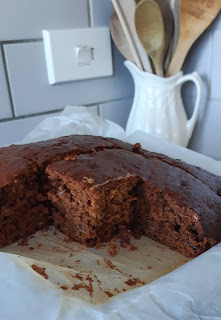 Parkin.
I remember my Mum and my Gran both making this. Sadly this is not either of their recipes but one I came across in the Best Baking collection which  I showed back here.
I have to say, this recipe is not as good as my Mums.
I'm also very happy to report that I have Mums recipe in my old school recipe book.
Do yo still have your school recipe book?
*
That's it, that's me all caught up. Time for some lunch and then some stitching.
Posted by loulee at 11:45 am

It was a great zoom party yesterday, wonderful to catch up with everyone and meet new ladies as you said. Your sunflower looks wonderful as do your butterflies. Belle looks very comfy on your folded up quilt, and that slice looks yummy!!

hhhmmmmm not sure about world famous but sure was a wonderful fun time. So nice to see everyone again and a couple of newbies come in to join us too....the more the merrier.......
I love how you say as soon as Tony popped up you dumped the quilt and back to the sewing room. Bugger about the thread......
What is parkin?

A wide variety of projects yesterday. It was great to catch up for a little while. I have a banana Parkin recipe I sometimes make, which is yummy. Yes, I have my school recipe book.

Lots of lovely sewing happening there. Running out of thread always seems to happen on the home stretch. So annoying but at least you can go to a shop something we still cannot do here. Yes, I have my old primary school cook book from the 60's but never use it as I don't bake because I will eat it lol. Most old recipes are not suitable for me these days as they used sugar, tinned or packaged ingredients for convenience and mostly meat in main meals. Enjoy your Zoom time, stitching and cat cuddling.

So nice to meet you at the zoom party and chat with you and the others. Wonderful progress.

It was a great day. Hope you get some thread soon...

I am also wondering what Parkin is, perhaps I need to google it. You made good progress on Zoom and was good to catch up with everyone again.

Lovely Zoom GTG again even though I popped in and out a few times..
That was very annoying running out of thread so close to the finish.
You are well prepared with the lunch box sized meals put into the freezer...

It's so lovely to "See" everyone at the Chookshed! You accomplished a great deal even with Tony snoozing! I have my mother's recipe boxes but we didn't make a school recipe book-I've collected lots of recipes though. I'm with Chooky What is Parkin?

Your dresden sunflower is looking great. A lovely start to your cushion.

Sounds like you had a good day and the sunflower is great! xx

Just love your butterfly blocks! And it was lovely to "meet" you at the zoom! Such a fun day! xx

Aww such a shame I missed this Zoom - they are so fun! Your floor cushion looks like it will be amazing; I love the sunflower. You managed to get a lot done, even with zooming and having to bounce around between rooms x

You got a lot done at the zoom meeting even with all of your moving around.

I have not heard of Parkin but it looks delicious. I also never had a school cook book.