I don't know about you, but I had a great weekend, even though I had to work.
Friday was an extra day off, we were all awarded a wellness day, as a thank you for all the hard work and effort that we have put in, even me who was off work for eight weeks. So I took it on Friday.
I played all day, with my floral scraps, making up blocks and even adding the first sashing strips. 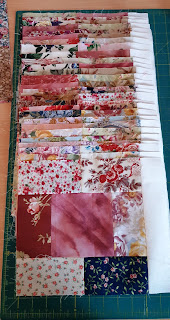 This is how I left them when I went off to prepare dinner. Debbie and her hubby joined us. We had Prawn toasts and spring rolls, followed by chicken and corn soup and Tony's amazing crispy shredded sweet chilli beef.
Debbie brought a HUGE banana cake.
That was a late night, and I thought I might be late for zoom on Saturday.
*
I wasn't late for zoom, I was awake in plenty of time to grab a cuppa and get logged in.
I spent the morning working on my Lucy Blue EPP project.
Of course.
It was good to see everyone and I enjoyed myself, listening and chatting until it was time to head off to work. I added three large blocks and four smaller spacer blocks.
I'm on to the last row!
Then I'll need to go around and add the edge pieces.
Chooky, thank you once again for a great day.
A little while ago I wondered about making it a little bigger, but decided in the end, to stick with original size, it's a good size for hanging in my hall way.
Tony wasn't available for my photo shoot today, so I pegged it on to my quilt hanging rail to get a good picture.
And decided while I was at it, I would change the guard.
I like to change the quilt hanging at the end of the hallway. Some stay for only a few weeks, some stay longer.
This one is a regular, I'm very fond of it.
It sometimes gets used as a table cloth too.
*
Also today I played in my sewing room pretty much right up to the moment I had to run out of the door for work. LOL
I was determined to get the floral scrapper together and to get the first border on. 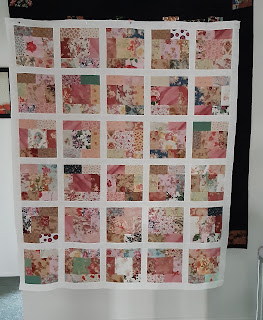 And I did it. I had just enough fabric, though there are a few more joins than I would like in some of those longer pieces.
I think I'll add a tiny peeper border (Chooky you've started something.....) before adding another neutral border.
That is a job for tomorrow.
I did think this one might be a donor quilt, but I've fallen in love with it.....
*
On the whole, I think I had a fantastic weekend.
I hope yours was just as good.
Posted by loulee at 11:11 pm

It was so good seeing you Friday/Saturday! I love your Lucy~such an inspiration for me! All of your quilts are so pretty!

Sounds like you did have a wonderful weekend. I love your Lucy Blue EPP quilt and it is looking fabulous! Some other pretty quilts there too! Hope you have a lovely week! Christine xx

It was lovely to catch up with you on the weekend. Your Lucy quilt is looking great and I really love your floral scrap quilt. It's bright and spring-ish unlike the weather at the moment. Have a great week :)

Oh, Lucy is looking so good!
And look at you getting that floral scrapper assembled. Kudos!
I enlarged the photo of the quilt that is a regular in your hallway. What wonderful prints!

All of your quilts are beautiful. So glad I was home in time to be able to join in the last couple of hours with Chooky.

Dinner sounds delish! Lots got done this weekend - sorry I missed you on zoom - only popped in for a short time. Loving Lucy and your florals are gorgeous. xx

Lovely quilts <3 The Zoom meetings are so inspiring. Just like you are right here in my sewing room.

Sounds like a delicious dinner. You made great progress over the weekend. Won’t be long before there is a finish.

Love that floral scrapper block.....a great use for odd bits and pieces! Lucy is looking very gorgeous, isn't she?

WOW! You’ve done so well getting your Floral scrappy together and I can see why you’d like to keep it.
Lucy Blue is gorgeous.. nearly finished….
Good to see you even for a short time.

You have done a quick job on your floral blocks, stitched into a quilt top already! Is that favourite quilt/tablecloth made from NZ fabrics? I have a very similar one which I made into a tablecloth, in fact it is in the table now.

You did so well on the weekend, Lucy is coming along really well and your floral blocks look wonderful, that went together fast. Love your Kiwi quilt. Very productive weekend.

What a lovely way to spend your time off x

Your Lucy quilt is growing and looking wonderful.
And the floral scraps have come up really well. You are zooming on this one.

Gotta love that Lucy so much!!!

You did have a fantastic weekend. Lucy is looking fabulous and your floral quilt is very pretty. I remember your quilt being used as a tablecloth in your Mum’s house.