A Jelly Roll! Well two of them actually!
But first this.
Remember the fairies?
I started this back in January, and had some issues with it. The kit was disappointing fabrics had been swapped out and no matter what I did I just couldn't get the friendship stars and sashing fabrics to lie flat and behave.
Back in January, I pulled out my trusty seam ripper and rip, rip, ripped all that work out, then dumped it into a box and left it to stew.
Well on Tuesday before work I got stuck in and had another go.
I had ripped and resewn the stars in the main panel so many times the fabric was pretty stressed.
So I gave up on the friendship stars and opted for simple blue corner stones. 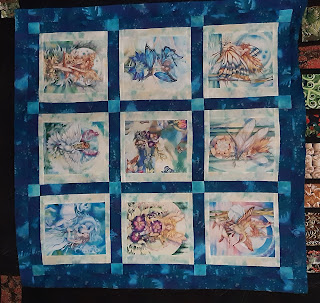 (Sideways picture sorry.)
As you can see, everything is much better behaved this time.
Next it was time to tackle some more stars.
I only got chance to make one, before I got a call from work, asking if I could be there in 30 mins??? 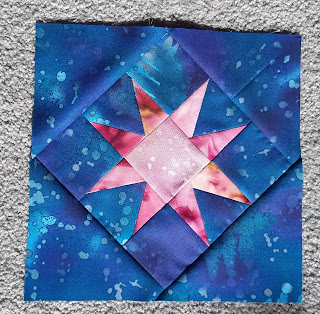 So I went off to work leaving a production line of stars on the design floor.... 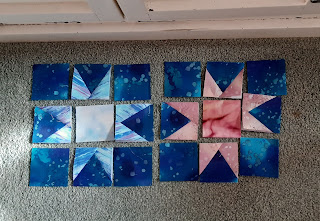 On Wednesday, after my chores I got stuck in again. These stars were much better behaved than the ones I attempted in January and in n o time I had then attached and the borders were on.
TaDaaaaaa! 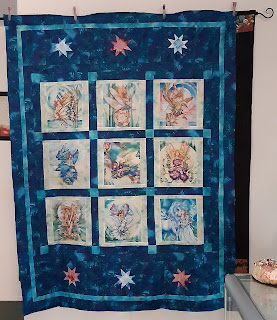 I was dreading getting back to this project, and I think it may be what has been blocking my sewjo recently. But now that it is done, I love it again.
I plan to do some custom quilting in the fairy panels and will need to sort through my tin of pretty threads for just the right colours.
*
Sew, about the jelly rolls.
Some time ago I purchased a black and grey jelly roll, I stashed it away for 'one day'.
While we were in Auckland over Easter I found a half jelly roll in rainbow brights and a plan was born.
Sorry, I don't have pictures of either.. At 8.30 this morning after getting dinner into the slow cooker I opened up my jelly rolls and the race was on.
It took a long time to join them all together and over an hour to join that first looooooooong seam.

So long in fact, that the supervisor got bored and went to sleep. 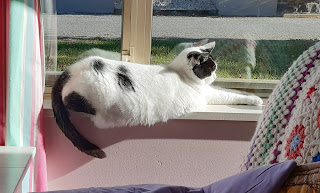 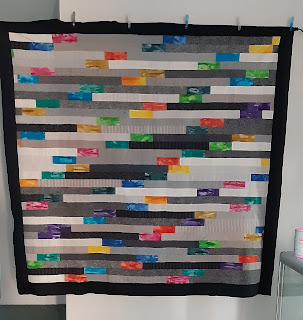 Two completed quilt tops, in two days.
I still didn't do any more work on my Christmas Ornament.
Maybe tomorrow before work.
I have to say, I really do prefer shift work over Monday - Friday 9 -5.
Posted by loulee at 7:31 pm

The fairy quilt looks great.... So pleased you pulled it apart if it just wasn't sitting right..... It does look great...
And I did a jelly roll race when we went to Scrub Stitchin'...... They are fun for a quick quilt.....

The Fairy top has come out beautiful and the jelly roll top has worked really well. xx

The fairy quilt looks so beautiful with those fabrics and the stars really create more interest. Well done.

Great decision on the fairy quilt. It looks really good.
And lovely to see the result of using the jelly roll too. That has worked well.