In my last post ( The first in what feels like a very long time. ) I mentioned that I had tried my hand at macramé, with mixed results. This here is the best one. 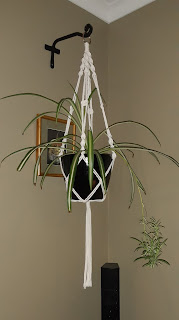 There are two others, that will be broken down and redone!!
Or maybe just broken down! I was using the wrong type of cord, it wasn't soft enough.
When I found the cord I've used here I had much better results.
Hopefully this will stop Belle (Damn Cat) from chewing on the tips of my spider plant.
*
I also mentioned that I have been doing a little crochet, I started this project simply because we were off to Auckland to see friends over the Easter weekend, and I knew that taking sewing along was not an option as I would need something mindless to fiddle with while we chatted and caught up. (I also finished two books in that long weekend.)
I pulled out some yarn that has been sitting for a year or three. LOL
I remember buying just because it was so pretty and I wanted it., no plan in mind at all.
You know how that works right?
There are also some leftovers that seemed to be the right colours in there too. 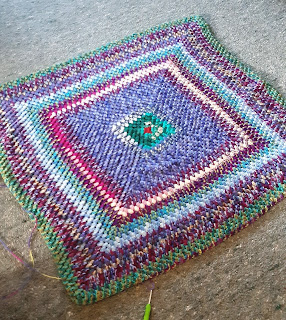 While we were in Auckland I visited Spotlight and purchased more yarn, in similar colours.
And yesterday I ordered a whole bunch more!
It's just big enough now to keep some of me warm on the cool evenings.
I'm not going at it hard every night though, so it will be a while before I decide it's done.
*
And do you remember the Lottie Da! quilt from way back in January?
She got a second mention when I found a retro sheet to back her with. 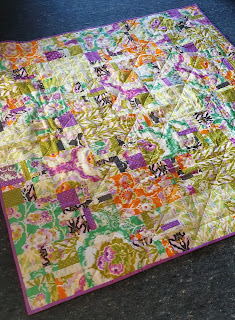 Well here she is complete.
She has been finished for some time, but for some reason I didn't have a picture in my phone, so had to get one this morning. She is a nice lap sized quilt, or maybe as a wee throw on a bed. She will be donated to work as a raffle prize for the staff social club.
*
Speaking of work. As I said all is going well and I have progressed from being a casual staff member to a contract holding staff member. It's good to have that security again. A few more hours would be good, but that said, there are always extra shifts.
I work mostly late shifts, which should leave me lots of time free for crafting, but as I said in my last post, I've been mostly reading and resting.
I do need to catch up on my Christmas Ornaments, and I did manage to do a little over an hour after my last post. I plan to do the same today.
There are lots of things waiting for me in my room, even some new things I didn't share yet!
Well I have to keep something in reserve, just in case I don't produce something to share!
*
Well that's me for today, time to get on with something more productive.
Posted by loulee at 11:18 am

Your macrame looks good. I’m determined not to go down that rabbit hole, but it’s tempting. The sad thing is, I remember the last time it was a craze - in the 70s. Crochet is a nice relaxing way to spend some time and perfect for cooler evenings. The colours are lovely. The quilt will be a great prize for the social club. It’s wonderful news that your job is now more secure.

Great work on your macrame hanger. It looks great holding the plant.
Perfect weather for crochet. How great to have it keep you warm as you crochet.

Great news that you job is now more secure. The macrame hanging looks great! Its is many a year since I did any macrame. The crochet blanket looks lovely and snuggly - just the thing to keep you warm on cool evenings while you work on it. xx

Your macrame looks wonderful Nd the plant is safe! 😄 your crochet looks great too and always good to have a finish.