So the freebie quilt is finished.
For the backing I found a piece of pink sheet that had been left over from backing something else. The binding is also an off cut from another project.
The batting is an off cut and even the thread I used to for quilting was originally purchased for another project. The only thing I invested was time. 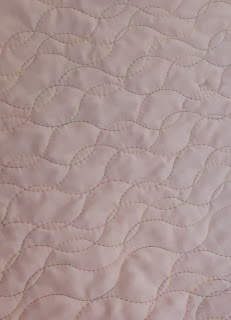 I used the wave pattern on my pattern perfect boards and I really like what I achieved.
It's easier to see on the back, than it is on the front.

I finished quilting it just after Tony was home for his lunch yesterday, so spent the afternoon in my room adding the binding, after a tidy up. How do sewing rooms get so messy?
Then I spent the evening closing the binding while Tony played his PlayStation game.
By the time I had sewn it all down and added the Loulee label it really was not time for a photo shoot, so I folded it up and left it for this morning. 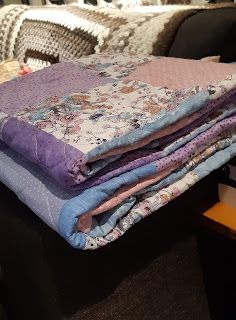 I half expected to find a cat lying on it this morning.
And here it is in the morning sun. 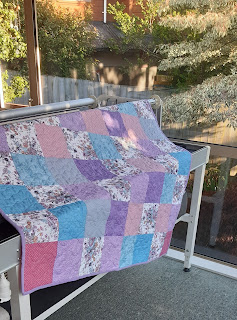 I'm very happy with how this one turned out.
Now to sort out another top for the quilting treatment.
I have a few. LOL
Jenny's Hexies for example.
While I was in my sewing room yesterday I shopped the stash and came up with a suitable fabric for the border and got that on.
Then it was time for a photo shoot.
It's not easy getting a photo of such a low volume quilt top. That carpet is actually green! 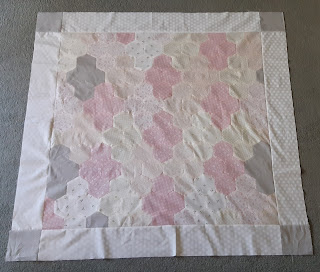 Next I tried the window trick, but the sun was too bright. 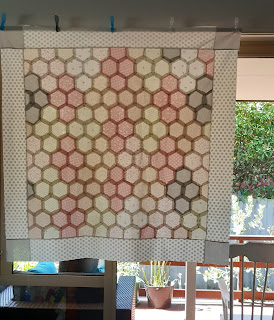 This will have to do for now. 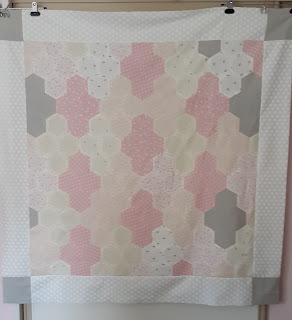 Hopefully I can get a better picture for you after I have quilted it.
*
It's my weekend off work, so plenty of time to decide which one to quilt next and make a start.
What are your plans for the weekend?
Posted by loulee at 8:44 am

Nice finish. Good to see you having a play with your quilting.

Fresh Florals turned out very well. And you have Jenny's Hexes waiting in the wings. I can see you are definitely going to be wanting more boards (and a bigger machine to accommodate the designs you want?).

it is lovely .. and in the true spirit of patchwork you "used up" all your leftovers

it turned out great!
And have fun with the next one!!!

Your hexie quilt is wonderful.

Jenny’s Quilt is loving and soft looking. The borders suit it to well.